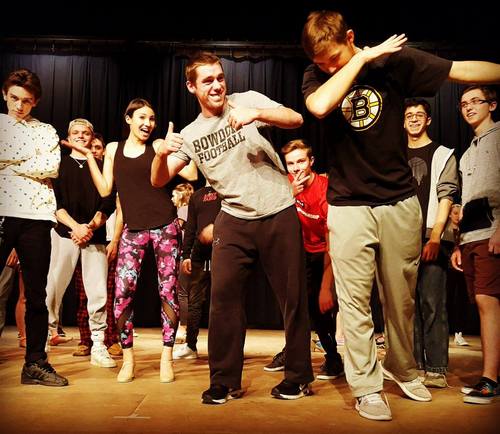 Above: The cast of Anything Goes hamming it up in rehearsals. (image from Facebook)

Algonquin Regional High School is putting on its next big production. This week they’ll be singing and dancing to Cole Porter’s “Anything Goes”.

The play will run this Thursday, December 8 through Saturday, December 10th in the school’s auditorium. The curtains go up at 7:00 pm each night. Tickets are $10 per person at the door.

If you aren’t familiar with the play, it’s a fun romantic comedy with witty lines, snappy tunes, and entertaining dance numbers.

I remember it fondly from the school’s production back in my heyday. I was impressed by my classmates performances. Judging by the school paper’s coverage, it sounds like this cast’s classmates are in for a treat of their own:

“A lot of people think because they know [the actors] so well, it will ruin the effect of seeing them on stage, but it’s completely the opposite,” [junior Connor] Macchi said. “Because when you see them onstage as this character that is completely not like their normal personality, it’s completely entertaining and incredible.”

You can read The Harbinger’s story here.