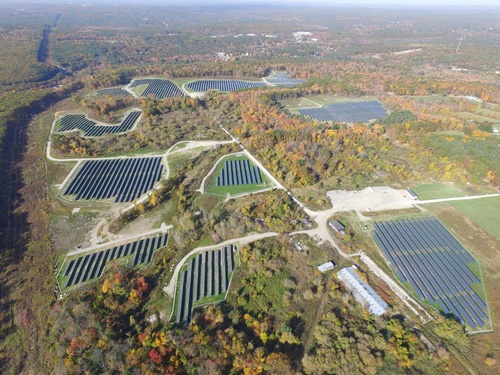 Above: Fay School has committed to buying about 10% of the renewable energy from one of the largest solar projects in the Northeast. (image from BlueWave website)

Fay School announced that it is an “anchor” for a massive solar project.

Before anyone gets riled up, it’s not another array being built in Southborough. The project is based in Oxford.

By subscribing to receive approximately 1.625 MW DC of solar net metering credits, the school is supporting the project and renewable energy efforts.

The project has been promoted as “one of the largest community solar projects in the Northeast”. And it seems that the school’s share represents about 10% of the project.

Fay School in Southborough, MA is pleased to announce its role as an “anchor” offtaker for the Barrett Street Community Solar Array project in Oxford, Massachusetts.

This project, BlueWave Capital’s largest solar project to date, will provide clean power and energy savings to over 121 homes and small businesses as well as two schools, Fay School and Phillips Academy in Andover, MA. As an anchor for the Barrett Street project, Fay has contracted for approximately 1.625 MW DC of solar net metering credits, enabling the school to further its sustainability goals, reduce electricity costs, and enable access to clean, locally generated electricity at a savings to Massachusetts residents and small businesses. “Fay School is delighted to be part of this green energy initiative,” said Rob Gustavson, Head of School at Fay School. “Our partnership with BlueWave Solar has helped us broaden our ongoing commitment to environmental sustainability.”

One of the largest community solar project in the northeast, the Barrett Street project will protect 300 acres of farmland from more intensive use and enable future agricultural use; reduce carbon emissions by 15,000 tons annually; expand access to solar for residents and small businesses; generate local tax revenue for the Town of Oxford; and create and support the Commonwealth of Massachusetts’ clean energy and climate goals.