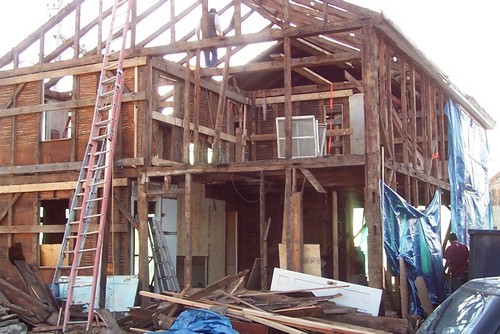 Above: If you were saddened by the tearing down of Woodbury Tavern in ’06, you may be happy to learn of plans to reconstruct it – just not where you probably hoped.
(image of deconstruction from SouthboroBelties.org.)

I just stumbled across a kind-of-amazing story I somehow missed last week. Formerly one of Southborough’s most historic buildings, the Woodbury Tavern will rise again. Unfortunately, it won’t be in Southborough (or as a public tavern).

The almost 200 year old building was taken down in 2006. But it’s wasn’t demolished by wrecking ball. A Southborough resident salvaged the materials in hopes of using them. After more than 10 years of inaction, Paul Bourden decided it was time to let the dream go.

In early February, Bourden posted news on his SouthboroBelties blog that he was putting the materials up for sale. According to local media, a listing was also posted to Craig’s List and quickly snapped up by a Connecticut property owner.

Bill Butterly, who has revamped seven historic barns and two houses, purchased the tavern pieces and plans. . . Butterly plans to reconstruct the tavern and use it as a home on his property in Guilford. A plaque detailing the history of the tavern will be placed outside the building.

“That’s the best part of it,” he said of keeping the tavern’s history alive. “I’m always looking for old houses to construct.”

The federal-style, 24,000-square-foot building had been at 75 Turnpike Road from 1808 until 2006. The building, which once had a bar, kitchen and ballroom, had been used as a home, store, meat market and fish market over the years.

Accounts of the Tavern’s history include the claim that Marquis de Lafayette was said to have stopped there in 1825 to honor the town’s Revolutionary War veterans and soldiers’ widows.

But Bourden’s blog post reveals that some great Southborough history lay in the dismantled materials themselves:

There are a lot of different building materials involved with an old house. Each has a story that includes very skilled craftsmen whether its hewing the timbers or cutting the intricate joints. We believe the bricks were probably made across the street somewhere around where Woodland meets Rt 9. This was the original brick works even before Southborough was incorporated in 1727. The boards were probably cut at the Newton’s sawmill where the Fayville Dam is now. Many of these boards skillfully planned by local carpenters (or at least their apprentices).

The Woodbury Tavern was built by Samuel Woodbury shortly after the construction of the Worcester Turnpike in 1808. This was a time when the economy was shifting from a subsistence to a market economy. This required ways to transport goods from where they were being produced to markets. The Worcester Turnpike was an early example of privatization. Built privately with a toll charge, the investors apparently went bankrupt when the railroad made it obsolete in 1835. The Tavern Stand as it was know, was an attempt to take advantage of the traffic on the turnpike just like we have in rest areas on the Mass Pike. Besides having a bar, Woodbury probably also rented rooms and horse stalls for customers but also farmed about 21 acres and produced shoes. Many of the products produced for markets were produced in a very decentralized system with farm families making shoes and hats in their homes.

That was from Southborough Wicked Local. I didn’t even pay attention the the sq ft quoted. Thanks.

A couple other interesting facts. While we know from deeds that there was a building on the property by 1814 and a band from West Point stopped there in 1817 for a concert, we found newspaper badly deteriorated but clearly with the date of 1818 and if that wasn’t enough they had placed an 1818 liberty head one cent piece under one of the floor joists of the ballroom which stretched across the front of the second floor. My interpretation is that the building was started by Woodbury in 1814 and not completed until 1818. My favorite artifact though, was a half inch mortise chisel which appears to have fallen into the wall and was uncovered in the dismantling. It was made by Sheffield tool maker Phillip Law. It will stay with the tavern and be displayed along with some other artifacts.

Now that is a beautiful story, and keeping the chisel with the tavern is very important. It’s the details that bring history to life.

Here is another “find” story you might appreciate ___ Recently, during restoration of the Burnett mansion, a scrap of wood was found hidden behind trim work over a set of beautifully crafted doors. On the wood scrap, written with a sharp pencil in elegant script:

this room was finished by
Michael O Cavanagh in the spring
of 1867. at this date it was called a
first class job
……. M O Cavanagh
…. from the town of Tipperary
……………………….Ireland