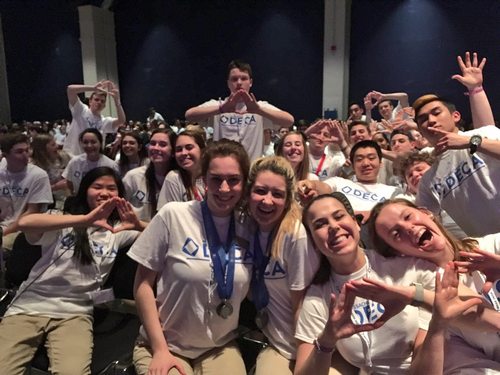 Above:  Gonk students weren’t dreaming that they dominated at DECA competitions again this year. (photo tweeted by @ARHSHarby)

Southborough and Algonquin students have plenty to brag about. Here’s a roundup of recent academic honors.

Competing against nearly 15,000 students across the country, a team of 22 Southborough 2nd and 3rd graders placed third in the nation. The team earned High Honors by scoring 187 out of 200 points. Contributing to the score were three 3rd graders who earned perfect scores: Lena Pierson, Phoebe Smith and Therese Moore. That achievement was only matched by 17 other 3rd graders in the country.

The WordMasters Challenge™ is an exercise in critical thinking that introduces students to interesting new words beyond their grade reading level, then challenges them to use those words to “complete analogies expressing various kinds of logical relationships”. (read more)

ARHS Student made it to State finals for Poetry Out Loud – The Harbinger:

Third year was a charm for Poetry Out Loud contestant, Junior Kara Hadden. The Algonquin student was a finalist in the school’s competition the previous two years. This year, she was named the school winner, went on to rank fourth at the Regional competition, and earned a place at the state competition. She recited two poems at the state finals earlier this month. (read more)

The following stories all come from recent “Principal Report” announcements out of Algonquin:

About 114 students departed for the State DECA competition in Boston on March 9th. The theme of this year’s competition was “Dream, Design, Dominate”. The results for our students were quite impressive: Competing in a broad array of business categories, and often in fields of 30 to 50 competitors, Algonquin students – including solo and team – gained 42 finalists, with 30 students qualifying for the next competitive level; ICDC. In all, Algonquin had 10 first places, 7 seconds, 1 third, 4 fourths, and 5 fifths. (read more)

The Harbinger has posted a story last night with more details on DECA’s work and achievements. Click here to read that.

Official results have been posted, and Algonquin has finished in 2nd place in [Worcester County Mathematics League] Class A, our highest finish since 2008-09. We also finished 1st among all “Large” Schools in WOCOMAL, which qualifies us for the MAML State Playoffs at the end of this month. Several Algonquin Students placed in the Top-100 among all WOCOMAL competitors: . . . 26 – Andrew Gao, 31 – Nick Ding, 32 – Alex Chen, 54 – Bharath Heggadahalli, 87 – Jennifer Lee 101 – Ben Poon (Close enough to Top-100 to list!). (read more)

The Harbinger had its best showing ever at last night’s Suffolk University Greater Boston High School Newspaper Awards Competition banquet. The paper earned second runner up in Sports Writing, first runner up in Editorial Writing, and first runner up in News Writing (We were the only school to earn recognition in every writing category). And most excitingly the paper was awarded the highest honor, the Massachusetts Press Association Award for General Excellence which honors not only the paper’s writing, but the publication as a whole in terms of coverage, design, and photographs. (read more)

The Harbinger posted more details on the Model UN’s work. Click here to read that.

Creative writing student Jana Wright, received word that one of her poems; Warning Signs, will be published in The Marble Collection, a literary magazine for Massachusetts high school students. (read the zine)

[Algonquin’s own Literary Magazine] Sachem received an award of “Excellence” from the National Council of Teachers of English (NCTE) annual literary magazine competition. This award recognizes last year’s magazine, and results are not released until mid-way through the following year.  (read more)

Updated (3/30 9:45 am): I came across two related Harbinger stories worth sharing.