Above: Author Meredith O’Brien launched her book by celebrating with the band players and leader whose laughter and tears were captured in it. (contributed photo)

A Southborough author and mother chronicled the difficult and bittersweet journey of Trottier’s 2012-2013 Big Band and its beloved leader. Recently, key players from the story came together to celebrate its publication. 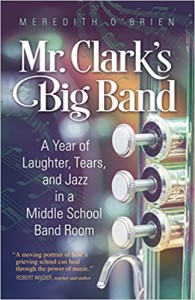 Despite my biases, I have tried to take a step back from my connections to the Big Band and simply chronicle the year in the life of this group, focus on the stories of select members and flesh out the who, the what and the why of Mr. Clark as fairly as I could, as best as anyone could describe the melancholy, joyous and silly year.

As most readers know, the Trottier (and Southborough) community was rocked in 2012 by the sudden, unforeseen death of 12 year old Eric Green. Author Meredith O’Brien was among the grieving.

Green and O’Brien’s son were friends and members of Trottier’s Big Band. A few months later, when the band performed in its annual Jazz Night, with proceeds to benefit the Eric Green Fund, O’Brien worried about how her son and other students would make it through. What she discovered was the inspiration for the book.

Band leader Jamie Clark spoke of the school’s heartbreak and led students through a moving performance. O’Brien writes of the concert:

I didn’t understand it. How were they able to play all those songs so powerfully, so full of splendor? All of those pieces? Then it hit me: Mr. Clark. Mr. Clark was the key. He had a big and boisterous persona, along with an obvious affection for and devotion to his students. His leadership guided the children through the initial days when Eric’s music stand stood empty, when the children asked Mr. Clark why he was gone, why not them instead of him. Mr. Clark’s students, along with their parents, adored him with a fervor that bordered on cult-like.

In the introduction of “Mr. Clark’s Big Band” O’Brien explains the concept that developed:

Why not follow the grieving members of the Big Band during the next school year—what would have been Eric’s last year at Trottier—and see how their camaraderie, the music and Mr. Clark helped them heal, and if indeed they would heal? They would have to travel through the first anniversary of his passing. In June 2013, they would have to premiere two pieces commissioned in Eric’s memory and play starring roles in whatever ceremony the Eric Green Committee organized.

O’Brien’s project was approved by the school and parents on the condition that all children’s names would be changed. The author interviewed students, families, and faculty. And she shadowed rehearsals and performances:

The result is this book which tells the story of how being a part of a middle school jazz band, led by a charismatic band director, helped students find peace with the death of one of their friends and bandmates.

I asked O’Brien about her experience and what she personally got out of it. She replied:

I was able to witness a group of students transform from a timid collection of very different people, into one unit whose members had one another’s backs. The students in the Big Band gave one another support and encouragement during an extraordinarily difficult year. That support, from one another and from their band director, enabled the students to take creative risks and safely process their emotions through their music.

I wondered if anything she observed surprised her. The answer was yes:

I was most surprised to observe how, almost as if by magic, the students in this 2012-2013 band were able to muster the confidence and the ability to play the jazz composition written in Eric Green’s memory, “Kaleidoscope,” so heartbreakingly well at the June 2013 event honoring their friend.

Two weeks before the event, “Kaleidoscope” was in shambles. As I listened to them rehearse in the band room, I was worried about how these young kids–who were frightened about making a mistake which they thought would “dishonor” their friend–would be able to play this very challenging piece under such intense pressure. But they delivered. And it was a beautiful thing to see.

On April 30th, Trottier hosted a celebration to launch her book. It was attended by about 150 people, including O’Brien, Clark, the Greens, faculty, and members of the 2012-13 Big Band. Here are some pictures from the event:

For more details and pics from the party, shared by O’Brien, click here. (That site also provides details on where you can purchase the book.)