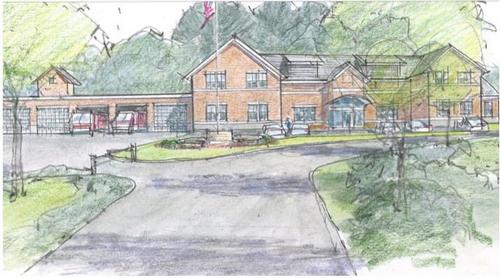 Above: A past artist rendering of a future Public Safety Building that this Tuesday’s ballot question seeks to fund through a prop 2 1/2 override. (image from Facebook)

Tomorrow is the annual Town Election. On the ballot, voters are asked to weigh in on one question:

Shall the Town of Southborough be allowed to exempt from the provisions of proposition two and one half, so called, the amounts required to pay for the bonds to be issued in order to acquire land and construct a new public safety complex, and for the payment of costs incidental or related thereto?

If you are unfamiliar with the details. . . In March, Special Town Meeting voters approved a $27M project to build a new public safety complex on the 60 acre St. Mark’s Golf Course. The deal included a conservation restriction on 93% of the land that would potentially allow the golf course to remain in operation (if some changes are made). It would also allow passive recreation on the land. (For more details, click here.)

Selectmen have opined that they need a yes on the question to proceed. An opponent to the project agrees, which is why he’s asking voters to say no. Meanwhile a former Town official continues to opine that the project can proceed under our current “Levy Capacity” regardless of the vote.

On Sunday, the Boston Globe published two opinion pieces on the ballot question.

Chair Brian Shea of the Board of Selectmen shared his opinion with the Globe, identical to a letter to the editor he posted on this blog. In those, he wrote:

At the annual town election on Tuesday, May 9, Southborough can put the final touches on an initiative supported by nearly 91 percent of attendees at the March Special Town Meeting – to purchase the land at the St. Mark’s Golf Course and to construct a public safety facility on a portion of it, with the remainder of the land subject to a conservation restriction in perpetuity.

The Globe shared a rebuttal by resident Jack Barron. Barron opposes the project. He wrote:

I am in agreement that we need a new police station in Southborough. The present station has long outlived its useful life. But the plan to purchase the St. Mark’s Golf Course and locate a combined police and fire station on the property is not the way to meet that need.

Barron went on to explain that he believes that preserving/restoring the golf course after construction would be too costly. He then posed:

I believe there is a more affordable option that would also ensure the continuation of the current golf course. Let’s construct a new police station and a new senior center in a combined facility on the site of the antiquated senior center building across from the golf course. I am confident this project could be undertaken for less than $10 million. I believe we could address the needs of the fire station through repairs that would cost about $1 million.

There remain questions about what rejecting prop 2 1/2 would mean. A former Chair of the Public Safety Committee, Al Hamilton, has repeatedly opined that the project can still proceed if the ballot question fails.

The Town has signed an agreement with St. Mark’s School on the land purchase and swap that are critical components of the deal. The deal gives the school ownership of the existing land where the public safety stations are sited. If Special Town Meeting voters had rejected the project, the agreement would have been nullified. Hamilton has posited that a no vote at this ballot wouldn’t nullify the agreement.

If you vote NO, then the taxes required to pay would have to come out of funds that would be subject to a Prop 2.5 cap. Presently, there is sufficient “Levy Capacity” to fund this debt and fund current operations. It would probably hasten the day when a Prop 2.5 override would be requested.

The BOS can proceed with this project without approval of this debt exclusion.

If the deal with St. Mark’s did fall through, the school has publicly stated that it would put the golf course on the public market. And selectmen have said that they would not pursue a new agreement to purchase the land that doesn’t include the safety stations.

But one of those selectmen has stepped down (John Rooney, whose seat will be filled in a special election on November 7th.) Another (Paul Cimino) will be leaving his seat as of Tuesday’s election. (Rather than running for re-election, he opted to run – unopposed – for the Moderator’s seat.) And a third (Dan Kolenda) is running for re-election this Tuesday.

Still, some project proponents have claimed that the school’s board would be much less likely to sell to the Town than another high bidder, because of the red tape involved.

As for public concerns over the building costs, selectmen have been planning for the next step if the question passes. They are poised to quickly put together a building committee to oversee the work with hopes to reign in costs. The committee would mostly be comprised of current members of the Public Safety Study Committee. But there will be at least one seat advertised for an additional resident.

I haven’t seen any real discussion of the board as to the next steps if the question fails. All that is clear is that Town officials hope it’s a discussion they won’t need to have.

Again, I ask, with no alterior notives or with any judgement, I always question the odd and the things that stand out, would one of the hundreds of life long home owners (self described townies”, tell me why the pro-new public safety building signs are predominantly on those property owners lawns in southborough? It seems to me a bit like class warfare? Blue collar verses the white collars? No need to get mad just asking?

[Edited out: I am re-instituting a policy from last election – 24 hours before election is too close to throw accusations at candidates. There isn’t enough fair time for them to respond before people vote.]

Your question makes no sense. All else remaining equal, the newer Southborough residents are more likely to be affluent (in order to pay the much higher entry costs of purchasing a house in Southborough relative to 25 years prior), which means that the long-term residents may be less affluent on average. Why would the population that is on average less affluent be advocating for an increase in taxes? That would be a strange sort of “class warfare”.

Also, you seem to suffer from the availability principle. Are we to believe you know exactly how long every person who has a sign on their front lawn has lived in the town (and if so, I’m frightened)? Or is your sample size so small that your observation is statistically meaningless?