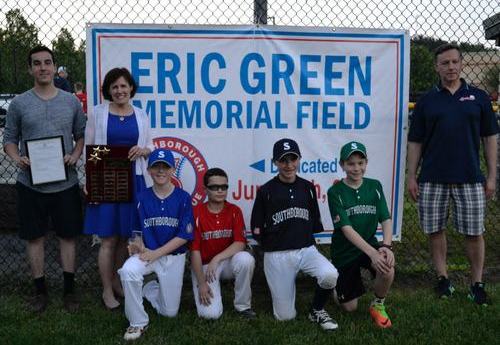 Above: Eric Green’s family with this year’s nominees (and winner Michael Morrissey) of the Eric Green Sportsmanship Award at the newly named Eric Green Memorial Field (cropped from contributed photo)

As usual, the night honored Eric Green’s spirit with speeches about the nominees’ and winner’s sportsmanship. This year also included a special “unveiling”, the official naming of their “marquee” field” in Eric’s memory.

As most readers are aware, Eric Green died at the age of 12 in 2012. That spring, an award was launched in his memory. This week’s announcement states:

In 2012, Southborough Little League (SLL) established a Sportsmanship award in memory of Eric Green, the 12-year-old Southborough resident and Little League baseball player who in January 2012 passed away from an undiagnosed heart condition. The Award is presented annually to a 12-year-old Little Leaguer that the coaches and SLL Board members feel best emulates the outstanding personal qualities exhibited by Eric during in baseball career and throughout his life; good sportsmanship, perseverance and overall commitment to family, team, and friends.

This year’s recipient of the Eric Green Sportsmanship Award is Michael Morrissey.

SLL also announced that their marquee little league field, formerly referred to as the Majors Field, has been officially renamed the Eric Green Memorial Field. This field naming is a fitting and special tribute to Eric and his family and creates a lasting legacy to him in Southborough in 2017, the year that Eric’s classmates graduated from high school. The unveiling ceremony occurred Sunday night, June 11th, immediately after the Eric Green Sportsmanship Award Ceremony.

Last week, representatives from Southborough Little League asked the Board of Selectmen for permission to rename Majors Field (by the snack shack at the Mooney Field complex) after Green. Howie Rosenstein called Green “epitome of what we try to teach our kids in terms of sportsmanship. . . respect, graciousness”. He explained that they hoped that kids playing on the field would look at the name, associate it with the Green award, and “try to live the way Eric did” – even if only for a day.

It was a vote selectmen were happy to make.

Below are pics* from the event on Sunday (plus one that wasn’t shared on the blog last year when Jared Lipkin won):

*2017 images are cropped from contributed photos.