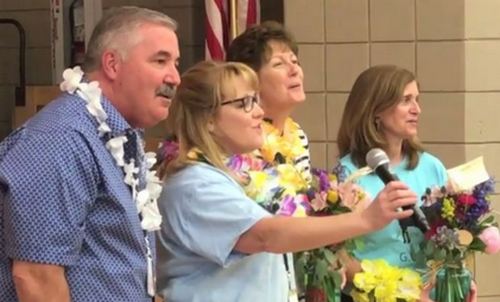 Most readers are well aware that the district is losing teachers and principals to retirement. But you may not be aware of two long-time members of Finn and Woodward schools who are moving on to their next phase: Margaret Daly and Jean Donlon.

Margaret Daly is a second grade teacher at Woodward who has served in the Southborough schools for 31 years.

Jean Donlon is the K-2 School Librarian at Finn and Woodward. She is also a former 2nd grade teacher (known then as Ms. Terry) who has worked in Southborough for 11 years.

(My family was fortunate enough to have each teacher for at least one of my children! Thank you to both.)

On Friday, each school dedicated their final monthly CARE assembly of the year to their retiring staff. Of course, that includes outgoing Principal Jim Randell who oversaw Woodward for 12 years with the addition of Finn for the past 7 years.

Kids at assemblies aptly learned about “transitions”. But the theme of the Spirit Day, “Aloha”, dominated the celebrations.

Both schools shared the festivities on Facebook. But I’ll focus on Woodward – where all three were honored. (But you can click here for the Finn video.)

Students helped create some special farewell parting gifts for their Principal. One was a special portrait that has been hanging in Woodward’s lobby this month. But the one he could take home with him was a book with children’s thanks and pictures (also contributed by Finn students).

Randell told students that he was first a teacher, but decided to be a Principal to make a bigger difference. He proudly referred Woodward and Finn as where students, teachers, parents and community are “the best I’ve ever had the pleasure of working with.” After thanking everyone, he promised the 2nd graders that they would be getting a wonderful Principal next year when Steve Mucci takes over.