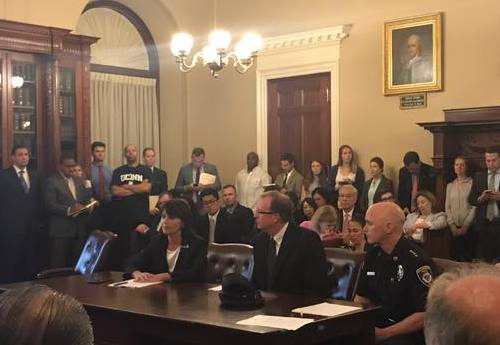 Above: The land deal to allow building of the new police and fire station was up for discussion in front of the state legislature yesterday. (image cropped from photo posted to Facebook)

Town officials and our legislative rep took another step in securing the future public safety complex.

Yesterday, Representative Carolyn Dykema, Selectman Brian Shea, and Police Chief Kenneth Paulhus testified before a Joint Committee at the State House. They were lobbying for a Special Act authorizing the Town to enter into the land deal and “negotiate and abate” rollback taxes.

In March, Town Meeting voters authorized selectmen to pursue a land deal with St. Mark’s School. It included the purchase of the 60 acre golf course (which will house the new safety building) and the sale of a few acres of Town-owned property to the school (including the current site of the police and fire stations).

Two articles were passed at Special Town Meeting. The second article was related to getting permission from the General Court of Commonwealth of Massachusetts. The Warrant included the following explanation:

This article will authorize the Board of Selectmen to petition the State Legislature for a Special Act that authorizes several points of the Purchase and Sale agreement with St. Mark’s School, whose authority and ability are not clearly defined in Massachusetts General Law. The execution of the Purchase and Sale agreement in Article 1, and therefore the entirety of the public safety facility as proposed, is dependent on the passage of this Article by Town Meeting, and subsequent approval by the State Legislature.

Yesterday, Dykema posted the following update to Facebook (with the image right):

Glad to join Southborough Selectman Brian Shea and Police Chief Ken Paulhus to testify in support of legislation that must be passed prior to the town beginning construction of its new public safety facility.

I followed up with her office to find out the status of the Special Act. Yesterday’s testimony was in front of the Joint Committee on Municipalities and Regional Government. Dykema’s aid explained:

The next step is for the Committee to report the bill out favorably. After that, it will be able to move through the subsequent steps of the process, including being passed in both the House and the Senate.

So, in sum, the bill is still technically in the early stages of the legislative process, but Rep. Dykema and Senator Eldridge are both sensitive to the time constraints, particularly with respect to construction season, and are working to move it through the process as quickly as is possible.

The text of the Special Act that was approved by Special Town Meeting voters reads:

AN ACT AUTHORIZING THE SOUTHBOROUGH BOARD OF SELECTMEN TO ENTER INTO A LAND EXCHANGE AGREEMENT WITH ST. MARK’S SCHOOL, INC.

Section 1. Notwithstanding the provisions of the Massachusetts General Laws c.40 and c.45 as to the sale and purchase of land and every other general and special act to the contrary, the Town of Southborough Board of Selectmen are authorized to enter into a Land Exchange Agreement for the purchase of land from St. Mark’s School located at 36 Cordaville Road, Southborough and for the sale of two parcels of land to St. Mark’s School, Inc. located at 19 Main Street and 0 School Street.

The Board of Selectmen are hereby authorized to approve amendments which shall be within the scope of the general public objectives of this Petition, or do or act anything in relation thereto.

; or do or act anything in relation thereto.

In May, registered voters signaled their support for the project and deal by passing an exemption to prop 2½, 1085 to 493.

Wait till you believers see the real cost in building TAJ Southborough. Boy, have you all been had.

Next time, could you be a little MORE condescending? This “I know better than everyone else in the town” attitude is getting a bit tiresome. There are LOTS of pretty smart people who disagree with you. Why can’t you just deal with that instead of being snarky and pejorative?

The smart people I know are against the taj, they just wanted the golf course land.

I am snarky and I’m proud of it. I also know when we’ve been had. The BOS and ZBA have had their own agendas, (in regard to Park Central) meant to harm the taxpayers and promote the developers, builders and other associated with the industry, without a thought given to neighbors, neighborhoods, safety, school children, walkers. overwhelming these neighborhoods with traffic meant for wide open roads. There is more here than meets the eye, and it isn’t pretty.

Wow, amazing how only YOU have the inside scoop and have figured it all out. .

By the way…can you also tell me who shot JFK?

Louise, you appear to “know what is going on behind the scenes” so-to-speak, and have all of the answers. So, why then don’t you put your energy to good use and run for the Board of Selectmen and “straighten” this “crooked” town out?? It is much easier to cast stones than to get involved.