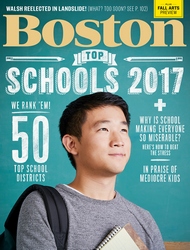 If you just put your kids on the district bus this morning, you sent them off to be educated in one of the top public school districts in the Boston area. At least, that’s what Boston Magazine is reporting.

The magazine came out with its 2017 rankings. Again, Northborough – Southborough scored high. But (again) rankings will rankle some, since a neighboring town scored much higher.

Our district placed #26 out of 125 (putting us just past the top 20% mark). I always take these rankings with more than a grain of salt. The methodology is usually questionable – as I find it here. Ranking criteria included weighted average MCAS/PARCC scores and “desirable”: smaller classes, low student-to-teacher ratio, and higher spending per pupil.*

I pulled out the data used to compare our district with Westborough and Hopkinton. You can see that below: 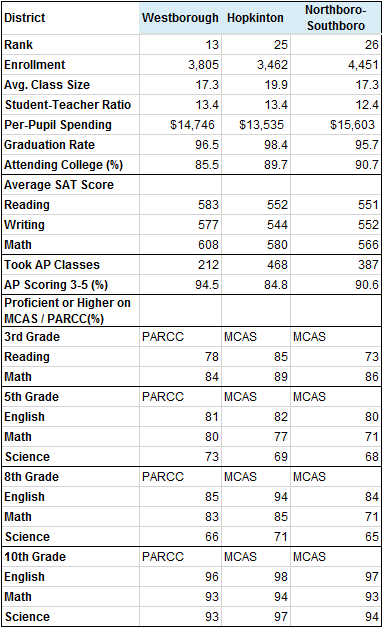 For the full ranking data set (and to sort by criteria), click here.

This year’s ranking is higher than their 2013 report. (That year, the district was split with Southborough ranked at #30 and Northborough at #39.) But it’s much lower than a 2011 list that ranked Southborough at #8. That ranking included criteria nowhere in this data set – like how many sports are offered and whether the district has pre-K programs. (The original article is no longer available online – so I can’t tell you more.)

So, what do you think of the rankings?

If you were to rank schools, what “data” would you prioritize?

Methodology: We ranked the 125 school districts that lie within, or partially within, I-495. To compile the list, we collected the most recent available data provided on the Massachusetts Department of Elementary and Secondary Education website (profiles.doe.mass.edu). For districts that report multiple lower grade levels individually, a weighted average score was used. This year some schools took the PARCC test in grades three, five, and eight, while others took the MCAS; the test each district primarily used is noted below. To calculate the rankings, George Recck, director of the Math Resource Center at Babson College, compared each district’s data points to the overall average for all districts. He then applied a percentage weight to the standardized data for each district to create an aggregate “score” (we considered a smaller class size, a lower student-to-teacher ratio, and a higher rate of spending per pupil more desirable).

I’m not sure what I think of the data and ranking, but I am sure of my own opinion regarding the quality of the Southborough schools. I am thrilled with the elementary education that my children have received so far! We feel lucky to have our kids in the schools here.

Agree, Betsy! There are so many varying reports where we are higher or lower, and it’s not the easiest to decipher who they come to the final rankings. But we’ve had great experiences thus far living in Southborough for the past 5 years.

General observation from the above data: we spend $2000 more per student than we need. Any future plan to bring SB inline with Hopkinton? I am not expecting an answer, but more than $4M in savings would help the town budget.

What makes you say it’s more than we need?

Hopkinton is rated (in the metrics used above) essentially the same but they have a per student cost of $2000 less. What efficiencies do they have that we do not? Or are we offering more in education with little return?

We just waste more money in the schools than they do.

I’m sure a number of factors are in play here, but I’d imagine teacher salary is one. If you really feel monies are being wasted, please expand and share your research

One money factor may relate to the fact that we’re involved in a regional high school system while Westboro and Hopkinton are not. I am unclear of the details involved and I know going regional was once meant to be a money saver but I think lots of government cutbacks have impacted those metrics.
My kids received a great education here. It was a consideration as we relocated from another nearby town.