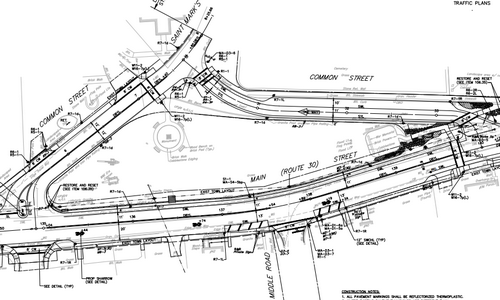 Above: The final design choices for the Main Street, including the Common St area, have been made official by the Town, but now await confirmation from the state.

The Town of Southborough passed another milestone in it’s major reconstruction project for Main Street. Today, Public Works posted the “100% plans”. The plans are intended to be final, but require approval by Massachusetts Department of Transportation.

According to the Town’s website, the plans have been submitted to MassDOT. If and when the plans are approved, the project will go out to bid for construction.

Digging is slated to begin this spring. The plans are too large to share on this site. To see how final details hashed out, open plans here. (Though, you may need an engineering degree to understand them!)

For those of you wondering about past requests by David Parry to incorporate moving light posts into the project – that proposal is dead.

Back in August, I reported that some selectmen were willing to consider it as a future project. But they stated that it wasn’t feasible to integrate into the reconstruction project given timelines. At that time, Parry was still pushing to change that.

Earlier this fall, Town officials and Parry met separately with National Grid about Parry’s proposal. Parry made public claims that selectmen and Town Administrator Mark Purple purposely killed the project by misrepresenting it. Town officials disputed his version of events and the veracity of some of his statements.

At the Board of Selectmen’s October 3rd meeting, Selectman Brian Shea, who also serves on the Main St Reconstruction Working Group, read aloud a letter from National Grid. The utility confirmed that it is unwilling to pursue Parry’s plan.

In an October 2nd letter, a manager explained:

The distribution line that currently exists on Main Street is a main distribution feeder for Southborough and other towns as well. The reliability of this feeder is a main concern of National Grid and relocating our equipment off the public way would compromise our ability to maintain our facilities in a timely manner.

The board agreed that, based on the letter, no further action on pole relocation will be taken.

Well That’s great that the telephone poles are staying, , I was concerned there would be no place to hang the American flags anymore if the poles were taken down , Always look forward to seeing old glory on the poles.

There would have been old fashion lamp posts in the place of utility poles (for lighting) and they would’ve held the flags.

This question may have been asked already. Is there a plan to continue repaving Main Street from Mauro’s market to Boston Rd? I notice the project ends just before Mauro’s market. Just seem like an odd spot to stop a project when “down town” ends more around the boston road area.

The area you are describing will have to be dealt with by the Town alone, not as part of the state-partnered project. The road there was apparently too narrow. In that section, officials determined that the help in funding wasn’t worth the sacrifices required.

I wasn’t covering town politics when the decision was made so I may not have the details precisely right. But I believe that, it would have impacted the parking and/or sidewalks.

The scheme referred to was a possible alternative to “undergrounding”, intended to save costs. It would have moved the utility poles off of Main St, on to other public ways, with permanent dedicated access to National Grid for maintenance, such as the public school driveway along Woodward School. The wires would have been fed to buildings from the back side. It would have been very similar in concept and engineering to the short section of downtown Hudson, where the poles were removed from Main St, and re-located on the parallel side streets.

But that plan is not to be. It required strong political support from the Selectmen to provide suitable access drives, and also more advanced engineering, and also more time. The Selectmen were not supportive and sent a letter as such to National Grid saying they were “not in favor”.

For those preferring a true “undergrounding” solution, this COULD have been done at reasonable cost, and permanent benefit, while the road is under re-construction over the coming two years. But it is now too late.

As proof of viability, undergrounding is going to be done in a very similar way in downtown Hopkinton, along 2000 feet length of their East Main St. It is being incorporated into Hopkinton’s road plans, which are now at 25% design level. Details are being designed into the final scheme, which involves road and intersection widening, just like Southborough.

More importantly, EXACTLY like Southborough, the Hopkinton roadwork is being paid for 100% by the State, while the removal of utility poles and undergrounding of wires must be paid for by Hopkinton, which will vote to fund the project, at a total (all inclusive) cost under $5 million, at their Town Meeting in 2018. That cost will by funded by adding marginally to residents’ electric utility bills over decades, which is the standard method of payment.

Southborough residents who have followed our Main St project may remember that we were told that the cost to underground 2000 feet of Southborough’s Main St would be about $11 million, but it was never moved forward into detailed engineering cost estimates. So that number was essentially a guess. It was never engineered and costed, and never moved forward as an option.

When the project came to a political impasse three years ago, and failed at Town Meeting, the Selectmen were forced to create a review committee, called the Main Street Working Group ….. but the Selectmen deliberately restricted the Group’s mandate to refining the surface design, and forbade any consideration of undergrounding.

So there you have it. Some towns take advantage of opportunities when they arise, some stamp on new ideas, some make the effort to thoroughly examine all ideas and prepare engineering cost estimates, some put a higher priority on the appearance of their historic downtowns, some give their residents a choice …. by a vote.

We have missed this unique opportunity, which will not arise again because Main St is not going to be totally reconstructed again. We never studied undergrounding in detail, so we never knew the real cost. We were never given a vote.

Of course, some residents don’t care, but others, and especially future generations, will deeply regret it. Just wait till Southborough has been redone, and then Hopkinton, so we can compare the two, before and after. Hopkinton starts just a year after Southborough, and the projects are very similar. The difference will be like Hudson, before and after.

Thank you David! Well said. You summed it up perfectly.