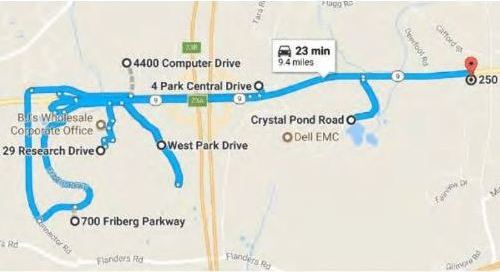 Above: If Southborough and Westborough manage to snag a good share of 50,000 jobs for their proposed “South Campus” of Amazon’s HQ2, asking Alexa how traffic is at rush hour would likely yield different results than demonstrated in the proposal. (image from 495 Crossroads proposal)

I assume that most readers are aware that hundreds of communities are competing to land Amazon’s second headquarters project. But many of you may not be aware that Southborough is among them.

If you aren’t familiar, the mammoth company invited proposal bids for it’s HQ2. The big draw:

We expect to invest over $5 billion in construction and grow this second headquarters to include as many as 50,000 high-paying jobs – it will be a full equal to our current campus in Seattle.

I had heard that 26 locations in Massachusets submitted proposals. I read headlines that “MetroWest” was one of the competing regions. I even knew that Southborough was communicating with Marlborough to support its proposal efforts. But it’s not until today that I realized that the proposal wasn’t for a campus near us – it’s for a project that would have significant siting in our town.

Marlborough and Northborough would split the North campus. Hudson is also marketed as part of the project, but with no specific sites.

The three locations are among ten described in the proposal as:

providing 6,614,812 square feet of office and R&D space to meet Amazon’s build out requirements for Phases I through III and beyond. . . represent a combination of existing buildings, shovel-ready development parcels and other development opportunities that require a modest degree of permitting or infrastructure.

It also pitches that there are “additional infill development opportunities and vacant buildings at 495 CROSSROADS not included here.”

The proposal was posted on the Marlborough EDC’s website. The 73 page proposal puts a significant focus on the easy access to all of the state’s and New England’s amenities. It also touts the quality of life in the region, the state’s well rated educational system, and the education pipeline from prestigious colleges and universities.

For incentives, it indicates willingness to provide property tax relief. Though it clarifies that Southborough Town Meeting voters would need to approve an agreement, it promises aggressive efforts to meet Amazon’s needs:

The five communities of 495 CROSSROADS may provide municipal real estate tax relief in the form of Tax Increment Financing (TIF) agreements with private parties, and all of the 495 CROSSROADS communities are committed to exploring tax incentives for the Amazon HQ2. The City of Marlborough may authorize a TIF at any City Council meeting and the Towns of Hudson, Northborough, Southborough and Westborough may authorize a TIF by a vote of Town Meeting. The timeframe for reaching a TIF agreement varies slightly by
community but the City of Marlborough and Town of Westborough are committed to executing TIF agreements in four weeks or less, and all communities will work aggressively to meet the needs of the Amazon HQ2 project.

In terms of project specifics, it describes Southborough’s proposed sites as follows:

DELL/EMC, Crystal Pond Road, Southborough & Westborough
Prior to being acquired by Dell, EMC fully permitted a 480+/- acre business park of 11 lots totaling 2.1 million square feet of new office and R&D development. The roadway and utilities have been installed, but construction of an onsite wastewater treatment plant is required prior to occupancy. The site is located 1.5 miles from Interstate 495 and 6 miles from the regional commuter rail station. This property is vacant and ready for immediate construction. Amazon can reasonably expect to break ground on this site immediately.

250 Turnpike Road, Southborough
This 10 acre parcel holds a vacant 50,312 square foot office building that is available for immediate occupancy. The existing building may be expanded on this site. This site is within 2.5 miles of Route 495 and approximately 4.5 miles from the commuter rail station.

4 Park Central Drive, Southborough
This 93 acre parcel is zoned for business use and can hold approximately 200,000 square feet of new office development. The site abuts Interstate 495 and is approximately 4 miles from the commuter rail station. Amazon can reasonably expect to break ground on this site within 18 to 24 months.

According to Amazon, the company has received 237 other proposals for sites across North America. Click here to read the proposal that seeks to bring them here.

The Commonwealth’s Secretary of Housing & Economic Development, Jay Ash, asked Marlborough to submit a proposal. When Marlborough did not feel it could do so on its own, my understanding is that the Secretary suggested a regional bid. MEDC asked Northborough, Southborough, Westborough and Hudson to participate in a regional proposal, which each community agreed to do. Southborough’s EDC discussed the Amazon RFP at its October 6 meeting. MEDC retained a consultant to prepare the regional proposal. My primary contacts at the Town were Town Manager, Mark Purple and BOS Chair, Dan Kolenda. The ED Coordinator and Town Planner assisted in gathering the Southborough-related information requested for the proposal. Amazon’s timetable was aggressive requiring the entire 495 Crossroads Proposal to be prepared over the course of a couple weeks. To Mark, Dan, Pam and Karina’s credit, the Southborough-related information was provided very quickly to support the proposal.

Given the timing imposed by Amazon on proposal submissions, we purposely made no suggestions that permitting would proceed in anything but the normal fashion. Our intention was to identify available commercial properties in Southborough that might meet a portion of Amazon’s needs. Any specific proposal by Amazon to locate any portion of its headquarters in Southborough would follow the normal permitting procedure applicable to any other project in Town.

wow, that’s interesting! maybe the apartments purposed for the park central land wasn’t that bad after all. be careful what you wish for.

It looks like the Amazon site would be in addition to the residential that the ZBA approved there. The developer has said he had plans for a hotel and another business there like long-term care. Amazon would have offices in that area not instead of the condos.

At least that’s my impression based on The difference between the lot size and the amount of land proposed for office space: “This 93 acre parcel is zoned for business use and can hold approximately 200,000 square feet of new office development. The site abuts Interstate 495 and is approximately 4 miles from the commuter rail station. Amazon can reasonably expect to break ground on this site within 18 to 24 months.”