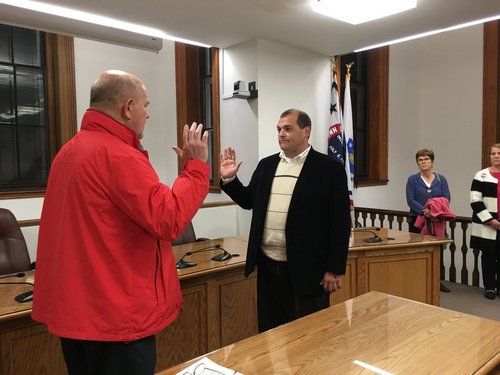 Today was the election to fill the vacancy on Southborough’s Board of Selectman. Considering that it was a local election, we had a strong turnout.

22.9% of registered voters turned up to cast their votes. With 39% of those counted in his favor, Brian Shifrin was sworn into office tonight (Tuesday, November 7th).

Shifrin is currently the Chair of the Recreation Commission and also serves on the Affordable Housing and Southborough Housing Opportunity Partnership Committee. (You can learn more about the new board member from his candidates’ letter to the blog.)

Three other candidates ran for the office. Here’s how they did:

All three are currently serving other boards in Town.

Shifrin will be getting straight to work in his new role. Tonight, he accepted an invitation to attend tomorrow morning’s Personnel Board meeting. And tomorrow evening, the Board of Selectmen is scheduled to meet.

Among items on the BOS agenda is the first right of refusal on the property at 135 Deerfoot Road. When the board discussed the opportunity at their October 17th meeting, members appeared split. At that meeting, Shifrin voiced support for bringing a project to Special Town Meeting voters.

3-1, the board decided to allow time for proponents to draft a final version of the potential article. All four members agreed to make a final decision at the November 8th meeting.

I congratulate Brian Shifrin on his win and I wish him well in his new role. I also respect the other candidates for their efforts.

I want to offer my sincere thanks to the many individuals who worked with me during my campaign and to those who made me their choice in the voting booth. I’m very grateful for the confidence and trust that each of these individuals placed in me. I’m disappointed that I wasn’t able to deliver the result that they expected and deserved. Nonetheless, I’m proud of the extraordinary breadth of the support that I received, and I hope that everyone who worked with me and who voted for me shares this feeling.

I look forward to continuing to be involved in Town government.

I look forward to his opinion on Flagg Road safety and Park Central during tonight’s BOS meeting. Encourage the community to come to the meeting at 6:30 to hear updates (and a possible vote) on Flagg Rd safety.

Southborough is fortunate to have had 4 candidates with track records of community and public service and dedication to our Town. Thank you to all the candidates for stepping up in such an important and often under-appreciated way.