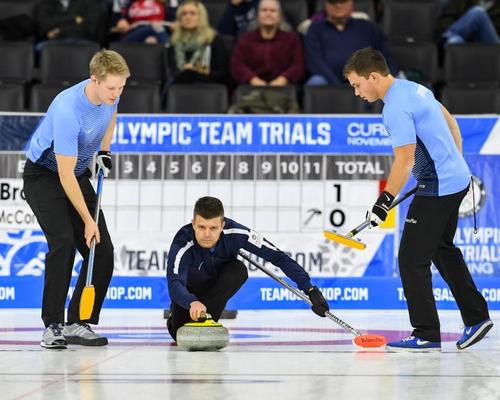 Above: A Southborough native (Korey Dropkin on the right) is competing this week for a place in the Winter Olympics. (photo from Curling USA website by Rich Harmer)

I have more news on Southborough residents to share. This one is focused on athletic accomplishments of adults who do or did call Southborough their hometown.

Hannah Guzzi started playing in Southborough youth soccer at the age of 6. Now she’s making headlines for her college career. Here’s a second one:

Hannah Guzzi’s name will always be right there among Amherst’s all-time greats. . .

Guzzi’s accomplishments rank her as possibly the greatest women’s soccer player in the school’s history. Last fall, as a junior, she tied the school record for goals in a season with 19 while breaking the school’s points record with 43. For an encore this fall, Guzzi tied for the New England Small College Athletic Conference (NESCAC) high in goals with 11 and was second in points with 23. (read more)

A former resident is in Omaha this week competing for a place at the Olympics.

Southborough native Korey Dropkin is competing to qualify for the 2018 Winter Olympics in the sport of curling.

Dropkin will compete at the Curling U.S. Olympic Trials that are set to take place from November 11 to the 18 in Omaha, Nebraska.  (read more)

As of last night, Dropkin’s team was still in the running. For updated status, check the Olympic Curling team USA website.

Southborough’s Tim Newell, a former Algonquin Quarterback, is among the selected players:

The Catholic University of America football team was recognized with eight honorees on the 2017 New England Women’s & Men’s Athletic Conference Academic All-Conference Team, as announced by the league office on Thursday.

In addition to their GPA, each honoree must have achieved second-year academic status at his institution, and been a member of the varsity team for the entire season. (read more)