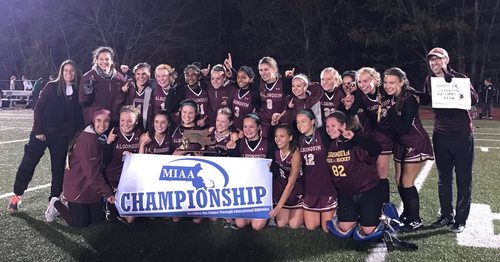 Above: ARHS Field Hockey won’t be playing in the State Finals. But they can still hold their heads high as the CMass Central D1 Champs. (photo tweeted by @ARHS_Official)

Algonquin Girls Field Hockey made it all the way to the State Semi-Finals this fall. Unfortunately, they weren’t able to overcome undefeated Western Champs, Longmeadow.

The lost put an end to the last of ARHS team playoffs this fall. But it’s not the end of varsity fall sports for the whole school.

As I previously posted, three athletes will run in the State Cross Country Championship this Saturday. Football also has one more non-playoff game to play.

Keeping with tradition, the T-Hawks will play the Westborough Rangers on Thanksgiving morning. After years of losing, the T-Hawks took home the rivalry match trophy in 2014. They’ve kept it through two more wins.

Next week, the T-Hawks will go in as the underdogs.

Westborough also failed to make the playoffs this fall. But it’s 5-5 record tops Gonk’s 2-8 losing season. Still, T-Hawks will be hoping their home team advantage helps them hold on to the trophy.

The Thanksgiving Day game will take place at Algonquin at 10:00 am.