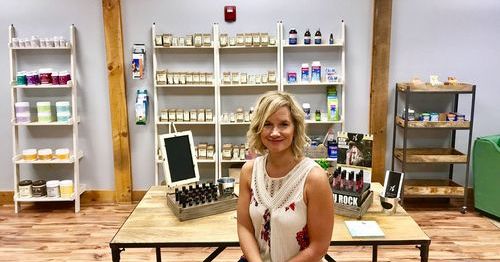 Above: Brooke Stillwell, who launched a new business in town this fall is just one of the entrepreneurs with Southborough ties that made recent headlines. (image from Southboro Wellness website)

Southborough business leaders and entrepreneurs have been in the news lately. So, it’s time for another roundup.

After a serious accident, a caring CEO and co-workers make recovery a group effort – Boston Globe:

After an employee working at Southborough’s Globoforce headquarters was in a serious car crash overseas, his colleagues rallied in support – starting at the top.

Beckett, head of corporate strategy at Southborough employee recognition software firm Globoforce, suffered a nearly severed arm, multiple lacerations, and a broken back and nose. He doesn’t remember the accident, but he remembers, clear as day, waking up in a German hospital room and seeing two familiar faces. One was his wife’s; the other was that of his CEO, Globoforce founder Eric Mosley. Mosley had an incredibly busy schedule, but there he sat next to Beckett’s bed — where he remained for the next five days. “In a crisis like this, I knew it was important to just be there for Grant and his family,” says Mosley, who got Beckett’s wife a flight to Germany and had child care arranged for his kids. Mosley even picked up his dog. (read more)

Our town is home to a successful Yummy Mummy baker. The business is out of town, but it was launched out of a kitchen in Southborough. The article covers her origin story.

Melissa’s journey began in the corporate world at a bank, and felt that this lifestyle was not suited for her. But, when her friend Stephen Kramer got married, Melissa offered to give him and his wife a brownie bar as their wedding gift. And from that point on, people were begging for more brownies. Her friend suggested that she sell these delicious brownies which were her grandmother’s recipe. (read more)

Another entrepreneur out of Southborough recently launched her business in town.

“Over the years, I have seen amazing things happen in the lives of people who are willing to work on their health and change their mindset,” she said in a statement. “It is my firm belief that through education and lifestyle change there is no limit to how the body can heal.” (read more)

This story recaps accomplishments of a Southborough business under its now retiring CEO.

Mary Ann O’Connor, president and CEO of VNA Care, has announced her plans to retire in January, after more than 40 years of service to the fields of home health and hospice. . .