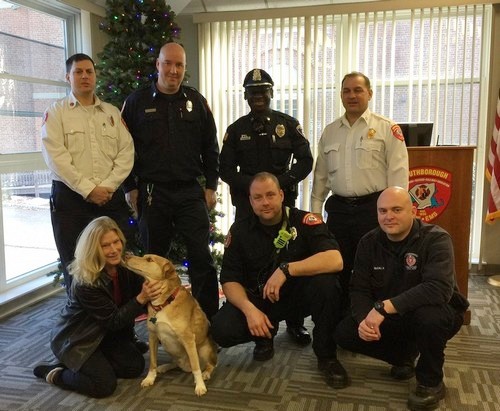 What’s the canine equivalent of rescuing a cat from a tree? I guess it’s a dog from thin ice.

This week, Southborough firefighters made a valiant water rescue.

Resident Isabelle Murphy asked me to share her story (complete with headline) and public thanks.

On Tuesday afternoon Southborough Firefighters and Police quickly sprang into action to rescue Rory from the melting ice on the reservoir. Using life lines and the water rescue sled, they went out over 150 feet to retrieve the pet who had followed a deer.

Once safely back on land, Rory thanked his rescuers by bolting and running home.

Everyone was too busy with the rescue effort and safety at the scene to take pictures during the action. But Murphy visited the station today with Rory to thank the rescuers. She sent me pictures from the visit.

According to Murphy, this isn’t technically Rory’s first rescue. Her family adopted Rory four years ago from BayPath Humane Society which had rescued the dog from a high kill animal shelter.

Wonderful story. Thanks Southborough Fire and Police for all that you do!

There is a lesson to be learned here folks, Why was the dog loose? did it slip it’s leash? jump a fence? Escape from the house? Dog sees deer , and chases after it, once a deer gets out on the ice it is helpless , it slips and breaks it’s shoulders and can’t move, It’s a goner, have seen this before.
I am glad that the no one got injured during this rescue and The owner got their dog back, sometimes it doesn’t always end this way. Nice job by police and fire depts. also good training.

Excellent work, Southborough public safety. You take such good care of all of us!