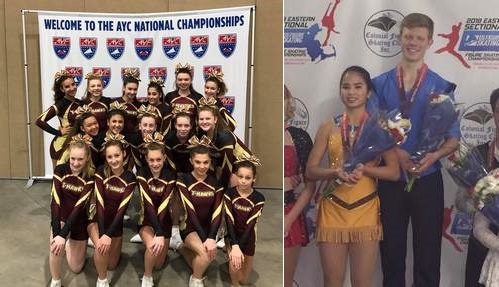 Above: 14 year old (and under) girls came in 2nd at one national competition. Another 14 year old will compete nationally in two weeks for a shot to be in the biggest world wide competition. (images left and right from Facebook)

I came across some resident accomplishments worth sharing. (Some of it is a bit dated, but I just learned of it.*) Coincidentally, the athletes are all 14 year old (and under) girls.

This fall, Southborough (and Northborough) cheerleaders’ 14U squad won the state championships, earning a place at the National competition.

This month, the girls traveled to Florida to compete. The squad came in 2nd place for their age group.

(Parents, if any other of the girls hail from Southborough, feel free to share their names in the comments below.)

In other sports news, another Southborough girl is headed to the U.S. National Figure Skating Championships.

This week, a Cape Cod paper covered the accomplishments of a figure skating pair. While the story focused on the male skater from Yarmouth, his partner listed Southborough as her home.

In November, Southborough’s Jade Hom and her partner Franz-Peter Jerosch won gold at the novice level in the Eastern Sectional Figure Skating Championships. Now, they’ll vie for a spot on the U.S. Olympic team.

According to the article, they’ll need to come in at least 3rd place out of the 14 competing teams. The Forecaster writes:

Hom, a 14-year-old from Southborough, Massachusetts, represents the Colonial Figure Skating Club in Boxborough, where she an Jerosch train during the week.

Jerosch and Hom paired up after Jerosch split with his former partner last February.

“I’ve been trying to find the right (skating partner) for a while and (Hom) is it,” Jerosch said. “We have the same work ethic. She works extremely hard on and off the ice (and) our skating style is the same.”

“We have very similar minds, ideas, and opinions and we’re able to share them which makes our relationship very easy,” Hom added. . .

This will be Hom’s first time competing at nationals, an opportunity she said she is extremely excited about. (read more)

I couldn’t find any visuals of the pair skating. But I did find a video of Hom giving a lovely single performance in May 2016. You can see that here.

You can also click on thumbnails of photos of the duo below to enlarge.

The championships begin on December 29th. The pair is scheduled to skate on January 1st and 2nd.

*Please parents, don’t be shy about squawking your kids’ news. If they make a big win, that’s worth boasting about, email mysouthborough@gmail.com.