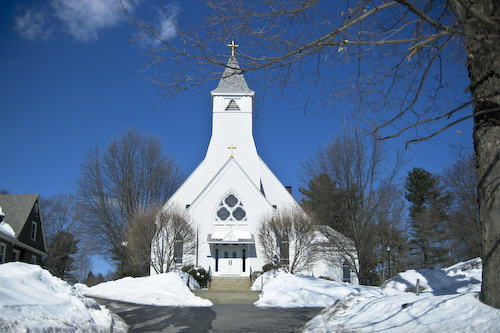 Above: Based on communications at a recent Planning Board meeting, it sounds like the Catholic Church will be expanding its property around St. Anne’s again. (photo by Susan Fitzgerald)

[Editor’s Note: Full disclosure, I am an abutter of St. Anne’s Church.]

Monday night the Planning Board conditionally approved* plans to develop multi-family housing off of Boston Road. The plan calls for razing the historic home at 28 Boston Road and building two duplexes and two single family homes.

In communications with the board, the project engineer explained that a parcel of the land will be “conveyed” to the Roman Catholic Church. That would add another 0.652 acres to the church owned property around St. Anne Parish.

The Church’s earlier sale of a section of its frontage to the parcel’s owner is what made the housing plans possible under the zoning bylaws.**

A small triangle of Church property (see image right) was purchased by William Poutre. It closely followed Poutre’s purchase of the adjoining land at 28 Boston Road.

That fall, Poutre filed for a demolition permit for the site’s historic home (ca. 1895)***. That triggered a review, followed by a hearing, by the Historical Commission under the Demolition Delay Bylaw.

According to member Michael Weishan, the Commission determined that the property qualified for Preferential Preservation. Weishan explained of the home:

28 Boston Road was one of the few survivors moved when the reservoir was flooded, and was an invaluable piece of the 19th century landscape around St. Anne’s.

Under the bylaw, a 9 month delay was put in place to compel the owner to try to work with the Commission on another solution. It was the Commission’s first experience implementing the bylaw since it’s adoption.

Ultimately, the Commission was unsuccessful in its preservation efforts. But Weishan tells me that members learned important lessons on how to improve the process. (I’ll post more on the Commission’s successes and plans going forward in a future story.)

The new parcel would sit mainly behind the Parish Hall and add a small buffer zone behind the 12 Walker Street location.

Based on comments by some members, the project was well received by the Planning Board. As part of the “Flexible Development Plan”, Poutre will leave 3.5+ acres (including wetlands) as open space behind the properties.

The 6 new residences will access Boston Road via a common one-way circular driveway that sets the homes back from the main road.

To view snapshots of the current layout and proposed plan, click thumbnails below. (For pdfs of the full plans and other relevant materials shared on the Town website, click here.)

The Stormwater Management permit for the 28 Boston Road development is still under review by the Conservation Commission. The next meeting on that is scheduled for January 18th.

*The Planning Board’s vote followed multiple meetings on the plan. The board walked through conditions and waivers in public, but voted with the intention of signing off on the final written conditions after the meeting. There are still legal steps to follow prior to a 20 day appeal period. But, on the final night of hearings, there were no objections made by the public, developer, or Town committees.

**According to Assessors’ records, 28 Boston Road includes a parcel purchased from the Church in November 2016 for $20,000. Materials filed with the Planning Board, related to a request to break the property into two ANR lots, indicate the small triangle of property purchased.

A letter and other documents filed with Planning seem to confirm that the amount of frontage now owned by the developer is what was required to support six homes on the “Residential B” zoned property.

***You can read more about the house at 28 Boston Road, in the linked pdf by searching for references to the “Patrick Bagley” house.