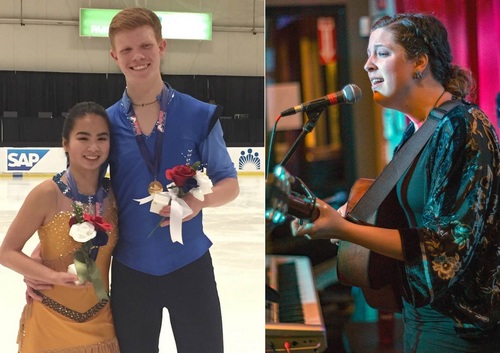 Above: I have a follow up (and clarification) to share on a young athletic champion and local media covered the survivor story of a resident musician. (image left and right from Facebook)

The media has again been reporting on the accomplishments and good deeds of Southborough residents. So, it’s time for another roundup of residents in the news.

Remembering Southborough’s veterans – one flag at a time – Community Advocate:

Last year’s winter gusts that blew through New England ended up displacing hundreds of flags placed in memoriam of veterans laid to rest across Southborough’s cemeteries. Steve Whynot, Southborough’s veterans’ graves officer, joined by a team of local veterans and members of the town’s Boy Scout troup, walked the cemetery in the frigid temperatures to collect and replace all flags that had been displaced. . .

Singer Erica Leigh Stenquist was excited about the release of her debut album “Puzzle Heart” – a musical mix of songs about love, life and loss with layers of background vocals, strings and precussion.

But on that career-high day – Nov. 29, 2012 – Erica Leigh was slammed by devastating news. She had thyroid cancer and it had spread to her lymph nodes. And as if that was not enough, her doctor said she may never sing again.

Two surgeries to remove her thyroid gland and 58 lymph nodes were followed by radiation treatments – and a cancer-free year.

Full of determination and grit, the award-winning Southborough songwriter, and 2010 Berklee College of Music graduate, has successfully resumed her career. (read more)

For the past 38 years, Shirley Taylor has spent countless hours at ice rinks across the country, judging skaters of all ages.

Her adult daughter, Tara, was obsessed with figure skating since the age of 5 and spent endless hours at the ice rink five days a week. She skated competitively. The family lived in Raynham at the time and while Taylor, herself, was not a skater, she was encouraged to become a judge. (read more)

Last month, I shared news on a Southborough resident who was part of a skating pair vying for Team USA.

I have an update – but first a clarification. A reader informed me that the info I shared on what I believed were Olympic trials was inaccurate. They are Olympic dreamers. And they were competing to make the national team – but that’s not the same as the country’s Olympic team. Apparently, they competed at two levels below the Olympic selections.

Still, as the article shares, they succeeded at their own level, which isn’t too shabby. They are now officially members of Team USA:

Jerosch, 16, and partner Jade Hom of Massachusetts are national champions in novice pairs, an accomplishment that earns them entry-level berths on the national team and an invitation to perform in an exhibition Sunday along with U.S. skaters heading to next month’s Olympic Games in PyeongChang, South Korea. (read more)