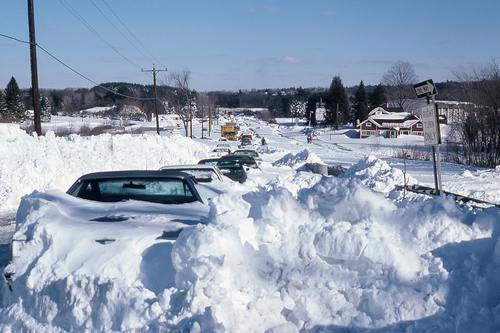 A reader submitted family photos from 40 years ago this week in Southborough. As you’ve likely been reminded by other media, today is the anniversary of the day that the Blizzard of ’78 hit our town.

Five years ago, Susan shared the following excerpt from the Southborough history book, Fences of Stone by Richard Noble:

The snow began falling at mid-day on February 6, 1978, and by late afternoon it was a genuine blizzard. High winds and swirling snows made visibility almost impossible, and the drifts piled deeper as the day progressed. People got off work early in order to have time to get home, and they ended up stranded on highways blocked by the snow. On Route 9 through Southborough hundreds of motorists were stuck, and traffic was halted, backing up for miles.

Southborough police and fire crews were working almost twenty-four hours straight out, setting up shelters at the Commonwealth Gas facilities, and at Woodward, Neary, Fay, and St. Mark’s Schools. A single lane was plowed alongside the stranded cars on Route 9, burying some even deeper, but a commandeered bus was able to get through and pick up the last of the unfortunate motorists unable to reach home, taking them to one of the shelter locations in Southborough.

The Cumming’s family’s photos below demonstrate the problem on Route 9 and the height of snowbanks on a side street. I’m told these were likely taken on Wednesday, February 8th. (For best viewing, wait until page finishes loading before clicking thumbnails below.)

Here’s more from Fences of Stone on the storm’s continued impact over the following days:

By the morning of February 7, everyone was safe and out of harm’s way, but nothing was able to move. So people walked downtown, stopping at Dick Curran’s Spa. Through it all he managed to stay open, serving coffee to those stiff and frozen by a long night’s work guiding wayward travelers through the storm. He got eggs from St. Mark’s, milk from Waveny Farm, and bread came in from the Cumberland Farms bakery by snowmobile.

The Blizzard of ’78 was a rallying point for the people of Southborough, the catalyst which inspired a sense of shared purpose, with people helping other people working together through a difficult time. For the rest of the year, stories about the blizzard would be told again and again, overshadowing all other events of the next several years.

As some of you know, although I call Southborough my hometown, I didn’t spend my whole childhood here. I was living down south when the historic storm hit. But, I’m hoping readers who lived through it will share their memories in the comments below. (I’d especially love to hear from people who experienced it in Southborough – but I’m not limiting it to that.)

You can also take a look at memories some readers shared 5 years ago here.

The Telegram posted a story focusing on the impact the storm had on the city of Worcester. (Some details are inspiring and a couple are humorous, but a few are tragic.) You can read that here.

These pictures are incredible! Thank you for sharing. That must have been something to experience.

I was 9 years old when the storm hit. I remember we didn’t have school for about 1 week (I was living in Marlborough at the time). Each morning we would wait for the announcement and be thrilled that school was cancelled. People were sledding and cross country skiing in the streets!

Liked best—-cross-country skiing down my street (Richards Rd) to go to store. Also remembering people who worked in Boston got there by making their way to board a school bus in middle of town.

I realize I am very late to this thread. I was living in Southboro at the time, on Parklerville Road. I was 13 years old at the time and in eighth grade at Woodward.

The storm was forecasted to be a major blizzard. I recall waking up the morning after the snow started, wondering, of course, if school was going to be cancelled. One look out my bedroom window into our driveway answered my question: our family cars were buried in snow. Only the antennas stuck out. I didn’t even bother to turn on the radio to learn if school was cancelled. School was ultimately canceled for two or three weeks.

I remember walking down to Route 9 with my Dad and sister. We have a picture of my sister, standing on the snow, her head the same height as the Parkerville Road street sign.

I also remember the power going out for at least 2 days and nights, and my Dad closing off rooms in the house to try and keep the fireplace’s limited heat in the living room. It got so cold in our family room that our small fish tank’s water froze :-(

It was a little scary because it got really cold and snowed for three days.