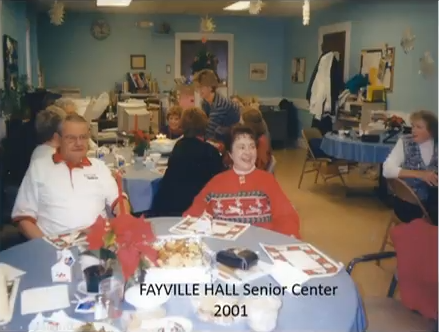 Above: Housing for the Senior Center has come a long way from its original digs in Fayville Hall. But supporters say more capacity and accessibility is needed and we can’t keep pushing it off. (image cropped from SAM video)

The Council on Aging is seeking support for renovations to the Southborough Senior Center. Town Meeting voters will be asked to fund $30,000 in engineering work. It would be phase 1 in plans to expand out the front of the center and improve facilities.

The following year, COA would request funding for a detailed design and estimate. An Article to fund construction would be brought to ATM in 2020.

At last week’s Board of Selectmen meeting, Selectwoman Bonnie Phaneuf urged the importance of the request. She told fellow board members that seniors had been asked to be patient for years waiting for needed improvements to accessibility and capacity. She said she was no longer patient.

Although there was no formal vote and the final budget is pending, the board unanimously agreed. They supported bringing an Article to Annual Town Meeting.

There also may be a request to include a salary increase for staff. But that’s not included in the budget recommendations presented at the same meeting. And selectmen didn’t express an opinion.

The Southborough Senior Center was started 20 yrs ago in Fayville Hall, with a part time director and small budget. 15 yrs ago they moved into a little space in Cordaville Hall. There was a remodel 8 yrs ago that dropped the ceiling (for better heating/cooling and acoustics) and added a moveable wall to allow splitting of the meeting space. And recently the kitchen was renovated.

The center still has issues with bathroom facilities (only one toilet available for evening programs), limited seating in the kitchen, and facilities that limit the size or number of activities. Phaneuf described issues making it hard for seniors with wheelchairs to navigate space for some programs.

COA Director, Pam LeFrancois, shared some numbers on the population the center serves. “Seniors” using the facility is up by over 125% since 2001. Over 900 seniors used the facility in 2017.* But that doesn’t capture the repeat usage, which LeFrancois called “huge”, with people coming in on a regular basis.

The number of activities has greatly expanded. An active base of volunteers running programs has helped, allowing them to get “more bang for their buck”. Two examples included the Trailblazers for active seniors and the Dull Men’s Club. LeFrancois and Harrington shared that the center had been recognized by the state and nationally for their successful volunteer assisted model.

The Senior Center’s main purpose is clearly to be a welcoming social hub for seniors. It gives older/retired residents a place to interact, build friendships, and participate in activities, rather than being isolated at home.

But a secondary purpose that LeFrancois talked about has been growing in recent years. Supporting seniors with struggles associated with aging is another part of Council on Aging’s job. The Outreach Coordinator, Nurse and staff have been helping residents (and their caregivers and families) struggling with issues around dementia and alzheimers.

We make contact with people, we help guide them through a real variety of situations, a lot of difficult situations. . . we spend a lot of time doing that, and I’d say more time doing that now than we ever have.

LeFrancois also talked about financial struggles and helping people navigate insurance issues. They have a volunteer SHINE counselor who puts in many hours helping with health insurance and Medicare, but staff also supports that.

The budget presented by COA shows a flat funding request for budget and operations. Head of the COA Bill Harrington asked the board to pressure the Personnel Board to increase salaries to “what their peers and comparable Towns get for salaries.”

He summed up by asking that Advisory and selectmen continue their support of the center:

We feel that the Council on Aging has presented very reasonable budgets over the years. Our requests have been what we feel are in line with what the Town can afford and what we really need.

There was some discussion/confusion between Phaneuf and Town Administrator Mark Purple about how the renovation plan funding was listed and whether to include the request in capital expenses or an article. But there was no opposition to the $30K request.

As for the staffing increase, the Town’s budget is still unfinalized. Advisory was still working with the Personnel board and other boards and departments before making their recommendations.

*Based on another part of the presentation, I believe “Seniors” in this context includes older residents aged 50+.

Updated (4/8/18 2:09 pm): I misspelled Ms. LeFrancois’ name and mistakenly referred to Mr. Harrington as head of the Friends of the COA. He is actually head of the COA, which is the Town’s board.

Sorry, not right now. Fundraise!! This town is in horrible financial shape and our BOS member Phaneuf doesn’t seem to care. Disgraceful. Remember this next time you vote, people.

Mr. Harrington. Met you today at Transfer Station. I apologize if my comment offended you, that I wrote above. I still however, believe this is not the time for expenditures on any building expansions here in town at this time.