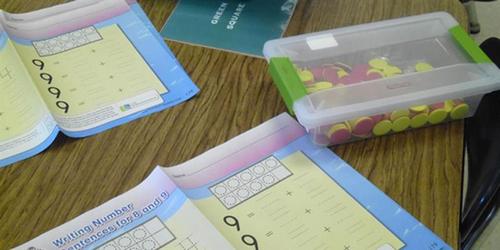 Above: Unlike in days of old, Kindergartners at Finn School need to learn a lot more math than counting to twenty. The tuition for K students to get a full day’s education is hopefully taking a big drop this fall and disappearing by the following one. (image from Finn website)

Some good news came out of some of the many meetings during this year’s budget season. The Southborough Schools are carrying through on the promise to “transition” to tuition-free full day Kindergarten.

The biggest news, fingers crossed, is that parents planning to send kids to Kindergarten in fall 2019 shouldn’t have to pay a fee.

In January, Superintendent Christine Johnson shared the plans to reach tuition-free Kindergarten in FY2020 (which is school year 2019-2020). It was prefaced by a caveat:

with all variables remaining somewhat as they are today, because that’s the best we can do.

That same presentation previewed a potentially significant reduction in this year’s projected tuition. That has since changed, but not by much. As of February, the administration planned to reduce tuition by over 32%, bringing it from $2,950 to $2,000. That’s better than last year’s 9+% drop from $3,250.

Don’t make out your checks yet. Final decisions on the actual tuition fee won’t be made until the summer – finalized by August 1st.* But the version of the budget figures were based on is the same one headed to Town Meeting voters in April.

If the projected reduction does happen, it would finally bring tuition back to 2008 rates.

By fall of that year, parents began to pressure the school to eliminate the fees. Even once the administration acknowledged parents’ complaints had merits – the steps towards change weren’t swift. (Let’s face it, big changes in our school rarely are.)

Administrators struggled with how to offset the loss in revenue from the Southborough Kindergarteners that attend full day. (That’s typically 90% or more of the class.) Administrators met with parents, formed a study group and examined the problem over multiple school years. Johnson eventually helped present to the School Committee the significantly increased curriculum demands for Kindergarteners since laws required schools to only provide half day for free.

Last year, the School Committee voted to approve the administration’s recommended phased approach to the budget change. The good news is that it seems the final phase isn’t that far off.

Projections for the next year’s Kindergarten class have over 95% of students signing up for full day, the same as this year. That means that the school will again use an integrated model, where only a couple of half day students are in a classroom of full day students.

*Final tuition will partly be based on actual enrollment. But it could also be impacted by State House decisions on reimbursements and grants between now and then. (It could also be changed if Town Meeting voters opt to reduce the School budget. But there isn’t much precedent for that given support by both Selectmen and Advisory.)

Great news! Is there any talk of expanding to a full day program like most of the state?

The half day program has always been free, as required by law. It is the full day program that most Southborough K students are enrolled in – for a fee. That is the tuition that the administration is “transitioning” to eliminate.