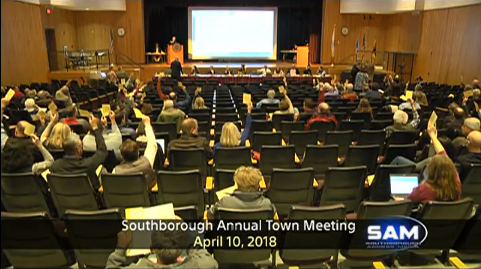 Above: In a sparsely attended hall, two votes were the difference between pass and fail on a debated zoning change last night. (image cropped from SAM video)

At the second night of Town Meeting, preservation Articles passed with flying colors, along with a measure to speed up future meetings. A proposed change to the zoning code on the Site Plan appeal process got tangled up in arguments and failed to pass the threshold.

Voters authorized dedicating over $880K in CPA funds to new open space and historic preservation projects. Most of that was in support of the new Southborough Golf Club and its Conservation Restriction.

Before endowing the CR, voters learned that the Board of Selectmen signed the final papers this week. Community Preservation Chair Freddie Gillespie led a round of applause for the long efforts of the many behind that success. Later, the small group of attending voters and officials was thunderous in its applause for Gillespie’s efforts on all of the CPC projects.

Over $646K of CPA funds were authorized for the Golf Club property. Gillespie previewed that the actual figure will be lower. Bids to fix the Golf Course parking lot and retaining wall came back lower than estimated. But the related Article was bundled with renovating two holes impacted by the Public Safety Building project. She explained that there wasn’t enough time to hash out what the revised figure should be. Any funds that aren’t used will be returned to the CPA’s unreserved fund.*

Voters also unanimously approved $175,000 to purchase 30 acres of Open Space and thanked the Halloran family for its generosity.** Another $32K+ will go to the first phase of a restoration project for the Library’s historic facade. And over $26K will go to restoration of the Old Burial Ground, contingent on some required paperwork.

There were few questions and no criticisms made on the CPA Articles. In contrast, earlier that night, Town Meeting spent over 30 minutes questioning and debating Article 32 to amend the zoning code.

The Article would have eliminated the option for voters to appeal Planning Board actions on Site Plan Approval to the Zoning Board of Appeals. Proponents argued that the current process pits the boards against each other. The process was considered unusual by the Land Court, isn’t seen in most Towns, and complicates Town Counsel’s representation of Town boards.

Opponents Jack Bartolini and Sam Stivers argued that eliminating it would force residents, abutters, and small businesses to incur costly legal fees if they want to appeal a decision believed unfair.

Many made veiled references to issues and a court case stemming from the Park Central development. David Parry, supporting the amendment and the Article called the project out as an example of why the change was needed. Jim Colleary argued against the Town rushing into zoning changes based on one controversial development project.

Complicating the debate was confusion over an amendment to the Article proposed by Zoning Board of Appeals Chair Andrew Dennington. Dennington argued that the language clarifies the intent of the code change, rather than leaving it silent.

Betsy Rosenbloom questioned Town Counsel on the language, concerned over the wording. In the end, she said she was too uncertain about possible problems in the wording and couldn’t support it. Others questioned if the words on the screen were correct as they seemed to call for “striking” some language without specifying adding the replacement words shown to be added.

The motion to amend passed, with only a majority needed. A motion was made by Colleary to indefinitely postpone, who argued that the Town should take more time to look at it. As a former ZBA member, he also argued that the Town board is better equipped to handle and care about local issues. His motion failed.

Later in the evening, Rosenbloom asked to reconsider the original motion. She argued that it was concerns about the amended language that prevented her from supporting the Article. And between speaking with the Planning and ZBA Chairs** and the arguments made by Selectwoman Lisa Braccio, she wanted to vote for the concept behind the original Article.

Moderator Paul Cimino denied her motion. He explained that when the amendment on the Article passed, the original Article was “disposed of” and couldn’t be returned for a vote.

Good news on a Town Code change that did pass. Voters overwhelmingly passed a measure to group uncontested Articles for a single vote. That should speed up the pace of future Town Meetings.

*I believe returning reserved CPA funds requires a Town Meeting vote. But that’s commonly done without issue at Annual Town Meeting. Although, in this case, funds are to be borrowed. So, it may just mean borrowing less.

**If any hands were “opposed” to the Open Space purchase, I couldn’t see them.

***In arguing her motion, Rosenbloom incorrectly stated that both Planning and the ZBA wanted to pass the Article to avoid the boards being pitted against each other. In fact, the ZBA was split, and the majority commented in opposition to the Article. They opted not to vote on a position. ZBA member Craig Nicholson stood to comment, but sat when her motion was denied.

Beth – Thank you for noting Betsy’s incorrect statement. I was standing simply to correct the record that the ZBA didn’t reach consensus on the issue.

First & foremost: thank you Beth for your invaluable service to our town.

Second: thanks to Paul Cimino for a tough job well done. John Butler said it well
elsewhere in the comments and I second his remarks.

Mr. Nicholson: I apologize to you, the other members of the ZBA and the people for misrepresenting in my comments at Town Meeting that the ZBA endorsed Mr. Dennington’s motion to amend the Zoning Bylaw. The error was not purposeful. Since Mr. Dennington is the Chair of the ZBA and he proposed an arguably significant change to the Zoning Bylaw, I got the wrongful notion stuck in my head that he had the support of his board. I regret the error.

For the record, I supported Article 32 proposed by Ms. Braccio, which would have taken away the current right to appeal to the ZBA from a Planning Board site plan review decision. I think Ms. Braccio was right, and there should not be a right to appeal these decisions to the ZBA. However, the voters chose to move forward with Mr. Dennington’s amendment to Ms. Braccio’s motion, which added that the only avenue of appeal was through a particular section of the Massachusetts General Laws.

I also had issues with the form/text of the amendment as shown at Town Meeting which others noted and which I believe (I may be mistaken) were not corrected at the time the amendment was called for a vote.

That said, I believe the issues I saw with Mr. Dennington’s amendment can be addressed and resolved. It is my understanding that upon appropriate action by the Planning Board, this matter can be brought before Town Meeting again at a Special or Regular Town Meeting. I hope Ms. Braccio, Mr. Dennington and other interested parties get together and bring this matter before the people in a unified fashion at a Special Town Meeting in the near future. The idea of striking ZBA review of Planning Board site plan review decisions seems to me a sound one.

I agree. Beth and Betsy, thank you.

HOLD THE PHONE EVERYONE. Let’s review the matter.

You mean to tell me that Mr. Dennington, Chair of the ZBA did NOT have the support of the ZBA itself, but he was making a presentation before the voting public in favor of the warrant to have appeals from Planning Board go straight to court (instead of the ZBA)?

Yet, Planning Board, who did have a consensus within its (ELECTED) board in favor of this Article was not speaking or making any kind of presentation?

Sorry to be just a taxpayer and member of the voting public: But why wasn’t Town Counsel making this entire presentation, since isn’t that his job?, i.e. what he is paid to do? Who asked and allowed Mr. Dennington to get involved? And why? He did not have the clear consensus of his Board. (Aside from the fact that they are appointed, not elected.) Why didn’t Planning Board have the same opportunity to speak as Mr. Dennington?

Also, importantly, BOS and ADVISORY gave virtually no commentary on articles. In past years, this commentary was helpful to the voters. The Warrant booklet stated that some articles were to be decided at the meeting – so the voter is left wondering how the two top boards came in with a decision. The slides did not help. The print was so small (stating their positions) that not everyone in the auditorium could read the slides and therefore did not know what was the decision of the two top boards on every article .

Why would the head of an appointed (NOT ELECTED) board be up and opining before the voting public, making an argument in favor of any Article, without fair and equal time for presentation by Planning Board?

WHY ISN’T EQUAL TIME GIVEN TO BOTH SIDES OF AN ARGUMENT SO THE VOTERS HAVE A BETTER, FAIRER UNDERSTANDING OF THE ARTICLE BEFORE THEM?

FULL AND HEALTHY DISCUSSIONS, PLEASE – THAT’S WHAT DEMOCRACY IN ACTION MEANS. This Annual Town Meeting is a meeting for the voting public, no one else. In any municipality, from Boston and throughout the suburbs, the meeting is not for the BOS or the Moderator, whose position is supposed to be neutral, or any other official. Annual Meeting is for the VOTERS to have their say once per year. Please let’s hear them out without rudely cutting them off. It’s SOUTHBOROUGH, for goodness sake. There was some unnecessary heavy-handedness in treating members of the voting public as they tried to get their concerns heard on the floor — some really good questions, BTW!
Thank you.

The ZBA voted that instead of taking a position, they would encourage that any members who wanted to speak would. When Dennington spoke, he said that they didn’t come to a consensus, but shared his strong viewpoint about the impact of the code on his board.