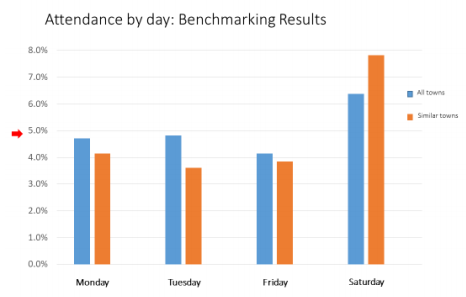 Above: A Town charged review committee found that turnout for Town Meetings in similar Towns across the state is much higher when held on a Saturday.

The petition is being brought by some of the same residents behind an Article request for funding Kallander Field repairs. According to organizer Kristen Lavault, that’s not a coincidence.

Lavault said that the dropoff before the late night vote on Kallander Field at Annual Town Meeting was 105 voters. According to the Recreation Commission Co-Chair, a lot of supporters had to leave because of children. (That includes relieving babysitters and taking home children that used the Town’s free babysitting service.)

What’s also not a coincidence is the choice to change the month. Lavault said that many Towns choose March as between sporting seasons. (Clearly, an important criteria for a group of voters that supports recreation projects.)

But she pointed out that young families aren’t the only ones impacted by the often late-into-the-night meetings. Some voters can’t drive at night.

Looking at moving the day of Town Meetings was one of the issues recently researched by the Town Meeting Review Committee. They reported that similar Towns that hold meetings on Saturdays have higher turnouts. However, members didn’t recommend jumping into the change.

With survey responses that left them unsure of voters’ interest in that change, the report released earlier this spring proposed experimenting by holding the next Special Town Meeting on a Saturday.

That didn’t happen. Which means that the Article for a bigger change is likely to take place when the fewest voters who care about the change can be there – late on weeknight. The Article is the last on the agenda, and follows four sure-to-be-controversial Articles.

Article 5 asks voters to replace the section on Date and Time of ATM in the Town Code bylaws (41-1) with:

The Annual Town Meeting for the consideration of all business, other than the election of Town Officers or other matters to be determined by ballot, shall be held during the week in March designated by the Selectmen as “Town Meeting Week “. The meeting shall be held on a Saturday commencing at 1:00 p.m. and recessed not later than 5:00p.m.

The current code simply specifies the start of the meeting as the second Monday of April at 7:00 pm. It doesn’t specify the timing of the meeting close and continuation to subsequent dates. Town Meeting Rules refer to 11:00 pm for adjournment unless voted otherwise. The choice of when to continue the meeting to appears to be tradition, since I can’t find it in the code or rules. (Traditionally, it continues to 7:30 the following night. If a third night is necessary, that is Thursday night at 7:30.)

Last night, Lavault acknowledged that the Article would still result in some Articles being voted on at night. She responded that there is no perfect schedule. And at least (for that first night) it would be on a Saturday. (I would imagine that more babysitters are available to stay late on Saturday.)

Now here’s a bit more background on the issue and the TMRC’s findings:

How to increase TM participation has been a matter of much debate in past blog comments. Moving the day to Saturday generally comes up as a possible improvement.

In 2016, the Town appointed the TMRC to study best practices of other Towns and solicit feedback from residents. Adjusting the schedule was one of the options targeted for study.

As for TMRC’s choice not to support a move to Saturday, it appears to be based on inability to assert that higher turnouts elsewhere was based on preference rather than convenience.

The TMRC had studied at attendance in 2013-15 in 90 towns with Open Town Meetings and similar municipal governments. They also honed in on 43 towns with populations from 5,000 – 15,000. The results showed that close to 8% of voters from that group showed up on Saturday meetings in small towns, vs just over 4% on Mondays.

The committee analyzed in its report:

Studying data from other towns, attendance is markedly higher on when TM is held on Saturday. However, that may not necessarily be an indicator of day preference as the resident survey indicates. It may be that data shows higher attendance at Saturday meetings because voters tend to be home, therefore more convenient to attend.

The survey referenced was the committee’s survey soliciting residents feedback on Town Meeting. 248 people responded (including 10% who said they never attend Town Meetings.)

43% of participants answered that they would support moving it to a weekend. In an earlier question on preferred day of the week Saturday appears to have come in 2nd place for their most preferred day with weekdays in 1st and third places:

I was confused as to why, the report then referred to residents having a preference for weekdays. So I reached out to the committee. They shared a chart which shows that Saturday averaged out as participants’ fourth choice.

You can view the full TMRC report here. You can see the STM Warrant here.

So, what do you think? Would you be more or less likely to attend a meeting on Saturday afternoon in March?

Is there any solution by which the meeting and take place and be either simulcast or recorded and voting can be held open for a longer period?

This would allow residents to appear and contribute to the discussion in person as well as other residents to review and vote post meeting. Perhaps hold open vote for 24 hours?

Guessing this is technologically / financially unlikely but seems archaic that only those who can afford the time are being heard.

The meeting is aired live and recorded. But the delayed voting – I don’t know about the viability of that.

I like the fact that TM voters have to first hear the presentations, questions, answers, arguments and rebuttals, etc. You can often go in with one point of view and end up with another. Plus, there are often amendments on the floor that complicate issues.

I would worry that remote or delayed votes would allow voters would tune out for most of it and just pay attention when it was time to cast their votes. Even if the arguments that are opposite to your position fail to sway you, I think you should know what they are.

Thanks for the information! We haven’t been here long enough to have actually overlapped with a TM… so that is good to know.

While I think your concern is valid I also worry about the idea of people gatekeeping elections based on how well they think others are. From a somewhat outsider perspective we may be getting “informed” voters but they are skewed to a very narrow demographic. If given the choice I would tend to favor a more diverse representation even at the risk of being less informed.

I hear you. I’d just prefer to try to do something that fixes the demographic problem without impacting the informed part.

If town meeting is on a Saturday, I would rather start in the morning, maybe 10 AM, and go until 5 PM to get more done during that time. We did that in the past for a special town meeting about the high school issue, and I thought it went well. If I recall correctly, food was sold for lunches.

Beth,
Sorry, but one major correction from your article above. The date of the Special Town Meeting is TUESDAY (not Wednesday) 5-22-18.
Thank you!

Thank you for noticing! That’s a big typo.

I know I’m willing to give up a weeknight, but not a weekend day. Weekends are too precious.

I’m a huge proponent of the electronic or extended voting concept. It’ll never happen but if we want a fair demographic, a drastic change is the only thing that will really change anything. Time is the real cost of town meeting, you can move it to whenever you like, but you won’t be solving the problem. With a town meeting style government we are agreeing that the people should, informed or not, have the right to vote where their dollars go. If making the most informed decisions is more of a priority, we should move to a representative body (if you think that actually works) Either way, I don’t find town meeting very effective in informing me anyway, all I’m getting is opinions and politicking, not facts. The threat of uninformed voters could actually make us all more informed by forcing a better mechanism for getting the information out. I generally think the state ballot questions work pretty well and the write ups that go along with each question generally inform me better than town meeting does.

I think having TM on a Saturday is a great idea and I agree with Nancy that we should start at 10am. Before we came here 25+ years ago, the town we lived in for 10 years had TM on a Saturday in March and the attendance was impressive! The Scouts came out and sold food and cookies, as well as our volunteer fire department members, There was babysitting onsite. It created a real sense of community. We had business taken care of in less than one day, and even though weekends are indeed precious, everyone could plan on it and didn’t think giving up one Saturday a year was a sacrifice when more citizens got a say in what happened in town government.

It is difficult for many to get to a TM on a weeknight…well, make that two nights, as it turns out most years…the older citizens are not comfortable or are not able to drive at night, families with young children can’t find babysitters to stay that late because the sitters have to go to school the next morning, if parents do bring their children to TM and take advantage of the babysitting provided there, they can’t stay late, either, since, again, they have to go to school the next morning, many have to travel for business during the week and aren’t even in town or they can’t get there because they have to work later hours or hours during town meeting, i,.e.2nd shift. And you have the citizens that just don’t have enough left at the end of the day to attend a meeting that will most certainly run late and continue for another night…

I would encourage everyone to vote for this and let’s give it a try! We might be pleasantly surprised by what it can do to make our town government more inclusionary and decisions made more representative of citizenry’s wishes.