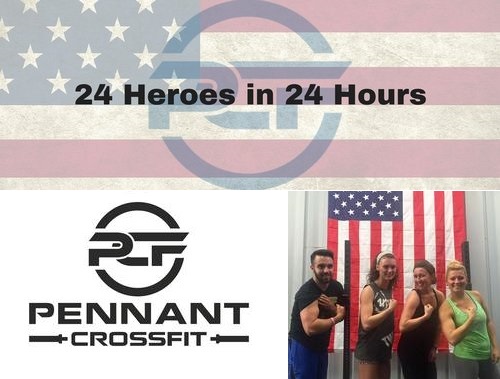 Above: Pennant Crossfit is holding another Heroes Workout fundraiser for veterans over the weekend. (images from events this year and 2016 on company’s website and Facebook page)

A fitness facility in town is organizing a special fundraiser for veterans again over Memorial Day weekend.

Pennant CrossFit will hold “Hero Workouts” hourly for 24 hours from Sunday morning through Memorial Day morning. One of the organizers, Rob Seymour, explained:

The men and women who serve our country, as well as their families, make tremendous sacrifices to protect our freedoms. This is an opportunity for us to simply say “thank you” and to take a moment to remember those who have made the ultimate sacrifice. As Veterans Inc motto reads: They were there when we needed them. We must be there now that they need us. Through this event, we affirm our appreciation for the sacrifice and service of our veterans by supporting their critical efforts.

The third annual “24 Heroes in 24 Hours” will be held at Pennant CrossFit’s location at 12 Southville Road. The event will be kicked off at 9:00 am on Sunday May 27th with a speech from a Gold Star father. Workouts will follow beginning at 10:00 am and ending on Memorial Day morning. In between, at 6:00 pm, tribute will be paid to an Auburn police officer killed in action.

Here are more details from the press release:

For the third year, Pennant CrossFit (PCF) has organized a fundraiser to raise money for Veterans Inc. based in Worcester, MA. . .

Athletes from area CrossFit gyms will be doing a “Hero” Workout at the top of each hour for 24 hours starting Sunday morning. In CrossFit, Hero Workouts are dedicated to members of the military and first responders who have lost their lives in the line of duty. Each of the 24 workouts represents an opportunity honor the memory and the sacrifices of the fallen. This year’s fundraising goal is $10,000.

The event will open Sunday at 9:00am with a keynote speech from David Whipple, father of Army Spc. Blake Whipple. Spc. Whipple was killed while serving as a Combat Engineer in Ghazni Province, Afghanistan when insurgents attacked his unit with an improvised explosive device. David will be joined by his wife, Kim, and son, Sean. The first workout will be “Whip” which is dedicated Spc. Whipple, and will begin at 10:00am. At the 6:00pm workout, athletes will be paying tribute to Auburn Police Officer Ronald Tarentino who was killed in the line of duty in May 2016. . .

People can get involved by dropping in during the event to participate in the raffle with prizes totalling over $12K, to make a donation, or to cheer on the athletes.

You can find more details on the Facebook event page which explains:

The suggested donation for each participant is $25, however all donations will be greatly appreciated! Anyone donating $50 or more will receive an event T-shirt. You can order t-shirts and make donations via Pay Pal @ http://www.pennantcrossfit.com/24-heroes/