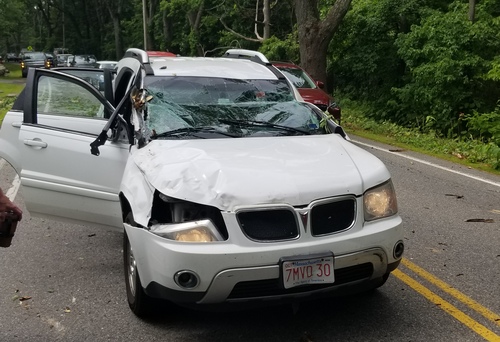 Above: A witness shared pictures from an accident over the weekend that he termed a narrow escape. (images cropped from contributed photos)

On Saturday morning, a large tree on Marlboro Road dropped a limb on a moving car, crushing the windshield. Thankfully, no one was injured in the incident.

Notably, the accident occurred on a fairly beautiful, and not extremely windy, Saturday morning.

Around 10:15, the limb apparently landed on a car driven by a Marlborough man with two passengers (including a boy). All three exited the vehicle before the police arrived.

A Southborough resident (and blog reader) was two cars behind the semi-crushed car. He shared what he witnessed, in words and photos:

In the air about 40 feet up a large oak tree limb exploded everywhere due to rotten hole inside and dropped from the sky slamming into the white car below. The occupants were able to exit the car on their own and narrowly escaped getting killed as the tree missed the roof by less than 1 foot collapsing the windshield and front end of the car. No one appeared to be injured and SPD responded and cleared the road.

Looking at near by trees, it appears there may be future danger ahead with several other mature trees in similar condition hanging over this location of the street as well.

The accident occured on Route 85, near the St. Mark’s tennis courts. The car was headed North towards Marlborough.

According to police, the Fire Department wasn’t needed. Just Public Works was called in to clean up the debris.

Here are more images from the scene (click thumbnails to enlarge):