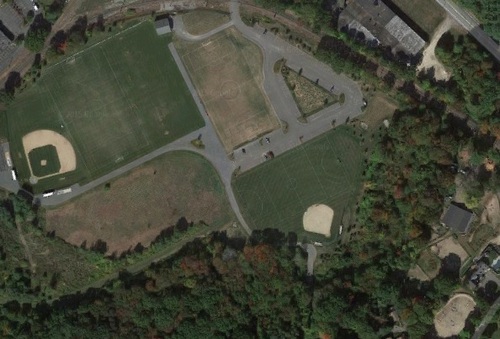 Above: Two opponents of recently failed Recreation Articles are asking voters to lobby officials to find other ways to meet the town’s field needs – like partnerships with organizations that own fields in Southborough and nearby (image of one of Fay School’s athletic complexes from Google maps).

Last week, the Board of Selectmen officially selected Saturday, March 23rd as the first day of 2019 Annual Town Meeting. Town Administrator Mark Purple suggested that the board would have to look at how to organize the Warrant. He was skeptical that business would be completed during the first window, 1:00 – 5:00 pm. He suggested that the Warrant be structured to interest voters in returning after the 5:00 – 7:00 pm recess.

There’s already one official Article that will draw some attention. Residents Jack and Louise Barron are spearheading a new Citizen’s Petition for the next ATM. Following up on recent failed funding requests by the Recreation Commission, the couple is asking the Town to research resources for recreational use.

Earlier this spring, Louise Barron publicly opposed the sized of Recreation Commission’s funding requests to maintain, repair, and increase the number of Town owned and run fields. Now she and her husband are asking the Town to look at other ways to meet residents’ field needs.

The Article posits that the Town has greater demand for Recreational Facilities than it can afford to purchase or support. To meet the funding gap, the residents are suggesting that the Town investigate partnerships with other organizations in Southborough and neighboring towns.

Getting on the ATM Warrant only requires 10 voter signatures. Apparently, they rounded up at least 8 more in favor of the Article, because they tell me it’s already been filed. The signed petition referred to an attached Article “Non-Binding Resolution—Creation of Recreation Resources Committee”, which detailed the purpose and plan.

Although the ATM is nine months away, the residents asked me to share the news. They want the public to begin discussing their concept, hoping it will result in ideas and suggestions.

The Article is a non-binding request to selectmen:

It referred to other owners of property and assets in Southborough (private schools, SOLF, state agencies, etc.) and potential partners in neighboring towns. Suggesting the possibility for “shared-access” agreements and the need for more planning, the Article proposes:

If the board followed that suggestion, the committee’s charge would include:

Sounds like a good idea. Definitely worth discussing and exploring.

Still have residual questions from public comments at Town Meeting. There was a comment on declining school population, i.e. diminishing demand for fields / recreation resources. As a starting point, would like to see more information and facts on this specific point.

The essential starting point to any future planning should be a clear attempt to quantify demand first (i.e. short to mid term demand, say projecting next 5 years), as this has not been done. Current approach has been disorderly, including last attempt to go off-budget, which was resoundingly rejected by the taxpayers. This should be very do-able. 1) Identify demand; 2) Survey resources; 3) Match demand to resources; 4) Budget / Cap spending — no more blank checks and no more constant hand out for more money. Sharing and better utilization of existing resources: this is the creative, CEO-type thinking that should spark creative, money saving solutions.
Good idea. Thank you.

Beth Thank you for posting this article. It can only benefit the town without strapping it financially. Something committees rarely consider. A quid pro quo for Sobo and all schools.