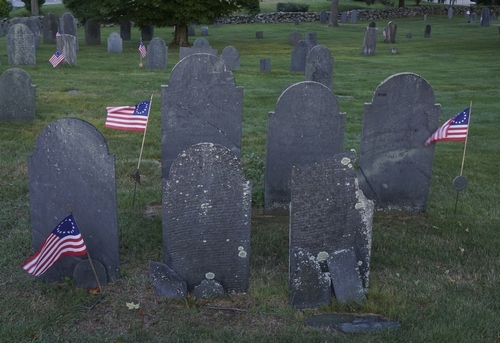 Above: Work to restore Southborough History will take place in Southborough’s oldest cemetery next week. (photo by Kate Matison)

One of the oldest historic sites in Southborough is the Old Burial Ground. Over time, much of the engraved history was being lost to erosion. In the spring, voters approved a Community Preservation Act funded project to restore old tombstones.

That project is scheduled to start this Monday. The Historical Commission shared an update on the work being done this summer:

If you see a trailer and a pile of gravel at the back of the lot behind the Town House, chances are it will be it will be conservator Kai Nalenz, President of Gravestone Services New England, doing restoration work at the Old Burial Ground.

DPW’s Karen Galligan has given permission for Mr. Nalenz to park his trailer at the Town House in the current gravel area at the back of the lot. He will get the gravel he needs delivered there as well

He will begin on July 16 and estimates the work will take two weeks.

In 2017, the Southborough Historical Commission applied for and was granted $23,000 in CPA funds to undertake much needed preservation of the Old Burial Ground.

SHORT HISTORY
Southborough’s Old Burial Ground is a significant part of the institutional focus at the heart of the town center on the north side of Main Street which includes, moving west to east, the Town House (1870), the Second Meeting House (Pilgrim Church), the relocated Flagg School, and the 1912 Fay Library. Enhanced by such an intact setting, the small, crowded burial ground provides a clear link with the earliest days of the founding of the town.

Most of the property is part of the three acres around the center designated as commonly-owned land to be used for both “the meetinghouse and the burying place.” It occupies the approximate position of an old Nipmuck burial site, and is believed to have seen a few interments of settlers prior to its official establishment. One early burial mentioned in town records is that of Margaret Newton, who died July 7, 1728. The latest gravestone is dated 1895.

As the town’s oldest-cemetery, the Old Burial Ground is a remarkable source of folk art that reflects the tastes, beliefs, and the lives of the residents of the Southborough over its first century and a half.

Among the significant graves here are the resting places of two ministers-Southborough’s first pastor, Nathan Stone, and its third, Jereboam Parker, who served for fifty and thirty-three years, respectively. Also buried here, in a Fay family plot, is “Ma jigger,” (1828), the last Native American to be interred on the site of the former Indian burial ground. Also buried here in marked graves are some of Southborough’s original settlers, including John Woods (1730), James Ward (1756), and Col. and Mrs. Timothy Brigham (1775).
By the 1840s the small burial ground was becoming crowded, and in1842 the Rural Cemetery opened and in 1843 the Old Burial Ground was closed.

You can learn more about the project in this post from last summer.

I’m a Cemetery geek…this sounds like a wonderful project. Can’t wait to see it happen.