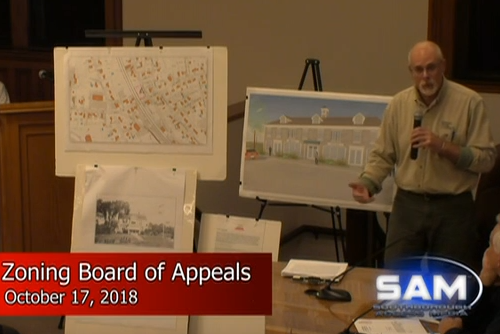 Above: The vacant downtown was green-lit for a mixed use retail/commercial/hotel project. (image cropped from SAM video)

Last week, the Zoning Board of Appeals unanimously approved a mixed use Special Permit for 2 East Main St.

The new project is expected to have 8 tenants. Half will rent out retail or commercial space on the first floor. The upstairs will be dedicated to four “hotel” rooms.

Prior to the vote, Chris Robbins of the Economic Development Committee spoke in support and lauded Town officials’ work behind the scenes to make the permitting process more efficient.

But the project hasn’t cleared all hoops yet. It will still need Major Site Plan Approval from the Planning Board. Speaking as a resident, Planning Board member Meme Luttrell expressed skepticism about the hotel use.

She reminded the board that based on Town Counsel’s information, there is no such thing as non-transient hotels in our zoning. She questioned having a four room hotel, saying that hotels are staffed to provide linens, cleaning, etc.

Lutrell also posited that upstairs lodgers meant setbacks for the project should follow the more restrictive residential requirements. ZBA Chair Craig Nicholson argued that setbacks for the mixed use building would be based on commercial, not residential zoning, even if the second floor hotel is considered residential.

Lutrell indicated that the EDC was working on bringing a mixed use zoning bylaw change to Town Meeting voters.

I don’t know if that’s on track for this March. If the project goes ahead without snags, it may be moot. But it could come into play if developer Peter Bemis runs into issues with the Planning Board.

Southborough Wicked Local covered the decision over the weekend. You can check out its coverage here.

Updated (12/5/19 10:34 am): I originally mistook the ZBA’s approval at this meeting as going against Town Counsel to allow non-transient hotel rooms. ZBA member Debbie DeMuria reached out to clarify that non-transient hotel units weren’t specified. The board approved mixed commercial uses allowed under the bylaws. If Bemis wanted to pursue including the residential units, he apparently would have to convince the Planning Board in Site Plan Review that they are covered by the zoning uses despite Town Counsel’s opinion. You can see more detail on that here in yesterday’s dedicated post.

I don’t object to developing 2 East Main St. as a mixed use property, but if the residences are being approved based on hotel zoning, then they must be taxed as such, hotel rooms.