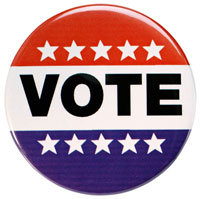 Since today is the last day for early voting, I’m sharing a reminder.

Until 5:00 pm today (Friday, November 2nd), Southborough voters can fill out their ballots at the Town House (17 Common Street) – no need for an absentee excuse. (Though, there are also Absentee ballots available.)

If you aren’t getting that done by today, then Tuesday is the big day.

On November 6th, all three precincts need to head to Trottier Middle School Gym (49 Parkerville Road.) Those hours will be Tuesday, November 6, 6:30 am – 8:00 pm. (Note: You don’t need a license to vote. But bringing one with you will help keep check-in and check-out moving faster.)

Still need to brush up on what who you’re voting for?

Don’t wait until you’re at the polls to try to interpret the long Ballot Questions. (And yes, there is more than one question.) This fall, the three questions relate to:

For the full language and the official explanation for what a Yes/No vote means, click here. For more background – Ballotpedia put together a slew of information about each question (including endorsments, pro/con arguments, and financing). Click here to check that out.

As for who you’re voting for. . . most of you know the big names running for the big offices. But there are a slew of Independent/Third party candidates also listed, plus a lot of regional/local seats. You can preview a sample ballot here. I also put together the list of the 30 candidates running on our ballot below.

You may want to take advantage of this printable checklist from the state. You can fill it out in advance and use as a “cheat sheet” when you head to vote.

*After the primary, I shared that it appeared that Devaney might not run unopposed. Aaron Hutchins ran a write-in campaign for the Republican ticket and those results took time to process. In the end, he failed to make the 1,000 vote threshhold to run in the general.