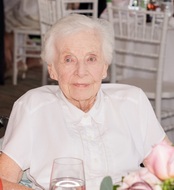 Evelyn J. (McCarthy) Littlefield, 97, of Southborough, died on Friday, January 04, 2019, at Beaumont Rehab and Skilled Nursing Center in Westborough after a period of declining health.

She was the beloved wife of the late Arthur Littlefield, who died in 1973.

Evelyn was a 1937 graduate of the former Peter’s High School in Southborough and earned a bachelor’s degree at Northeastern University. For many years she worked for Honeywell as a relocation administrator, retiring in March of 1983.

Evelyn was a former secretary for both the Southborough Catholic Women’s Club and St Anne Parish Council of Southborough, where she was an active member. She was also a former member of St Francis of Assisi of Englewood FL, as she spent many winters in Florida.

In addition to her husband, she is predeceased by a son, A. Leslie Littlefield and her siblings, Paul McCarthy and Claire McNeil.

Immediately following the visiting hour, a Funeral Mass will be held at 11 am at St Anne Church, 20 Boston Road, Southborough. Burial will follow in the Southborough Rural Cemetery.

To leave words of condolence to the family, please visit www.morrisSouthboroughfuneral.com.