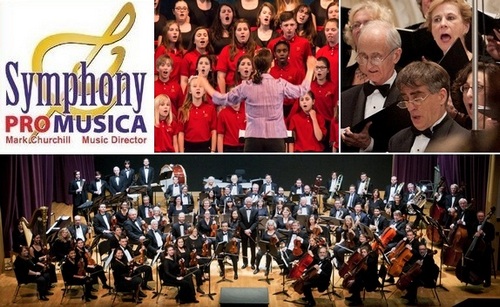 This weekend, Symphony Pro Musica is holding two performances of its 3rd concert of its 36th season. Once again, one of the performances will be held in Southborough at St. Mark’s School.*

The concert is titled “Sacred and Profane”. Joining the orchestra will be guests New World Chorale and The Worcester Children’s Chorus. Their voices are needed to bring the featured works to life: Carl Orff’s Carmina Burana and Antonin Dvořák’s Te Deum.

Carmina Burana holds a special place in classical music. Robin Hillyard, SPM’s principal bassoonist, says “It’s not only classical music fans who know and love this music. ‘O Fortuna’ must be known by just about anyone who has ever watched TV or been to the movies. As far as crossover pieces are concerned, it is certainly one of the best known. The emotions expressed in this work vary enormously. There’s so much going on in this remarkable piece of music, and it resonates so directly—and irresistibly—with our inner soul, that we simply cannot hear it without it affecting us totally. It’s like recharging our batteries. It’s rejuvenating.”

In case you still aren’t familiar, I’ve embedded a sample below. (To be clear, the sample below is by MIT Concert Choir, not by SPM and their choral guests!)

As for the other piece, SPM writes:

Te Deum, a cantata for soprano and baritone solos, chorus, and orchestra, is set to the Latin text of the famous hymn Te Deum (God, we laud you). Written by Dvořák in 1892 for his introduction to the American public, and dedicated to the 400th anniversary of the discovery of America, it has been described as ceremonial, uplifting, and joyful. The Te Deum is among Dvořák’s most popular choral works.But it’s not just about the guest performer. The entire symphony, led by Music Director Mark Churchill, will perform works by Wagner. It looks like one of those is the inspiration for the concert title:

The in town performance is a week from Sunday, March 17th at 3:30 pm in the school’s Putnam Family Arts Center. (Click here for the campus map.)

The Arts Center is the site of several public concerts this year. [This Sunday, March 10th, the school is hosting Assabet Valley Mastersinger’s American Folk concert. Click here for those details.]

The SPM concert is one of several in St. Mark’s “Southborough Sounds” series for 2018-19. As with many in the school’s series, the SPM concert will be preceded by a lecture. That takes place at 2:45 pm in the concert hall.

Below are details on the remaining concerts in the series:

You can find more details on the programs for the above concerts here.

Tickets for this concert alone are free for students, $25/adult and $20/senior. You can purchase tickets for just this event online here. Tickets are also available at the door.

If you plan to attend multiple concerts in the Southborough Sounds series, you may want to purchase pro-rated season tickets:

Symphony Pro Musica promotes that it “brings outstanding and affordable orchestral, choral, and operatic music to Hudson, Southborough, and the surrounding communities.” (You can learn more about the group by visiting www.symphonypromusica.org, calling 978-562-0939, or emailing spmoffice@symphonypromusica.org.)

*If you can’t make Sunday’s concert, you can head to Hudson High School the night before for its 7:30 pm performance.

I hope lots of folks come out for this excellent program. Carmina Burana is a grand performance of one of the most beloved works in the classical repertoire. Come hear why everyone from Domino’s to The New England Patriots use this piece of music to market themselves…