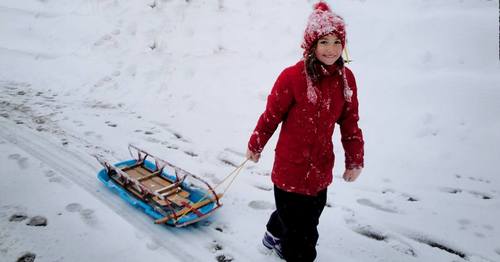 Above: Sorry, I missed sharing it sooner, but sledding at the Farm is on for tonight (without lit up lanes) (image posted to Facebook)

I’ve been waiting since the start of the year to promote Chestnut Hill Farm’s light up sledding. But, time after time, there wasn’t enough snow on the hill on Saturday evening to make a go of it.

Ironically, there’s finally enough snow – but apparently too much to allow the planned “lit up lanes”. Still, the event is finally a go, and I somehow finally stopped including it as a possibility in my events of the week highlights.

It looks like they’re encouraging people to come out early to take advantage of the sunlight. But after dark is also still on offer. From Facebook on Thursday night:

Come sledding this Saturday – or anytime!

There will be light up sledding on Saturday but it won’t be as lit up as usual. The snow buried the lights! But there will be some lights to guide you up the hill.

So… sled at your own risk in the dark! 😆 Or come early!

I’d assume the open invite for “anytime” doesn’t mean beyond 8:00 pm at night, since that’s when the original light up event was scheduled to end.

Beyond tonight, sledding is always dependent on conditions on the hill. There’s a messy forecast for tomorrow which might put a damper on future activity.

But given the photo posted from the Maple Tap-a-thon just a couple of hours ago (thumbnail right), it looks like there’s still plenty of snow on the hill this afternoon.

On a semi-related note, don’t expect to visit the goats when you stop by the farm. Given the notice that has been posted a couple of times recently, it looks like some families may have been disappointed not to find them: