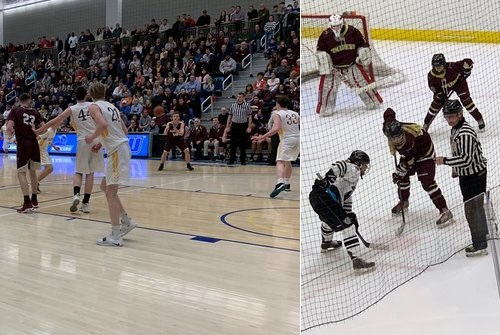 Above: This weekend was the end of postseason journeys for Algonquin Boys Basketball and Girls Hockey (images cropped from tweets by @ARHSAthletics)

It was a big weekend for at least three Algonquin athletes. Two runners competed in the Indoor Track Nationals on Friday in New York.

Matt Madamba came in 30th in the 200 meter dash. He was first in his heat, but didn’t qualify to run the final race. (You can read about him in the Harbinger’s coverage.) Tess Reyes also competed. She came in 28th for Womens 2 Miles and 29th for the 3000 meter.

At the New England Gymnastics Championships, Lizzie Debroczy was 3rd in the all around, tied for 2nd on vault, 7th on bars, 4th on beam and tied for 9th on floor. Great Job!

Performance Cheer got a chance to perform at the States on Sunday. Unfortunately, I can’t find any news or results out of the tournament. (Scratch that. Results were posted by Tuesday morning. Algonquin came in 9th out of 12 teams in Division 1.)

For the remaining varsity teams in post season winter tourney’s, this past weekend marked the end of the road.

On Friday, Boys Basketball made it to sectional Finals. That’s where their run ended with a 41-53 loss to Acton-Boxborough.

Although it didn’t quite end the way you had hoped, congratulations to @gonkhoops on a great season! You certainly have a lot of fans and supporters! Photos from the CMass D1 finals: https://t.co/5hKRrEkATQ pic.twitter.com/IdmtYuGFmU

Publicly, the team focused on its success in getting to districts and hope for next year. (With a freshman as one of their leading scorers), they have good reason to hope. From Southborough Wicked Local:

“It’s a start,” [Coach Doherty] said. “It’s a start for the program, start for the school, but that’s our goal. Our goal is to make it back here every year and we need to take it to that next step and we will. We got a good group of kids coming back.”

“It’s huge to finally put this program on the map,” [senior Nick Redden] said. “Obviously we would have loved to take home a championship back to Algonquin but it didn’t work out like that, but this team will be back.”

Girls Ice Hockey fell in the state Quarter Finals to Westwood on Saturday. You can read more about the 2-5 loss here.