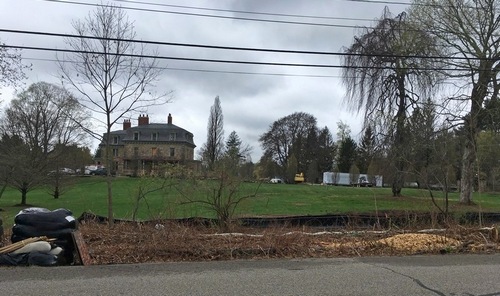 Above: Following up on complaints about tree clearing on the Main Street end of Parkerville Road. (photo by Beth Melo)

As previously announced, this is the week that tree clearing began for the Main Street Reconstruction Project. (Ironically, this Friday is the Town’s first officially declared Arbor Day. Stay tuned for more on that.)

Comments on the blog yesterday indicated a couple of readers were taken aback to see that included a couple of mature trees next to the Burnett estate. (Sorry, make that Deerfoot estate.)

Technically, the Town warned it would happen. Yet most of you probably didn’t notice it. (I didn’t recall, and I’ve been more closely monitoring the project than most residents.) So, it’s time for another look at the big road project with some clarifications and links.

Many residents who have paid attention to the Main St project know it isn’t contained to just that street. But most probably assume the only additional roads covered are a section of Rte 85 and all of Common Street. I’m guessing that not many realized/recalled that the north end of Parkerville Road is included.

Yet, the information was in the plans presented to voters that approved the project. And those plans did include the taking down of trees that were felled this week.

I followed up with Public Works Superintendent Karen Galligan for clarification on what happened and whether any replanting is planned. She responded:

The trees are on the Burnett property in the drainage easement. There were a bunch of invasive species, scrub and two large trees. They were not town trees. The plans say clearing and grubbing, the area was to be cleared, the trees weren’t called out separately from the area. The detail of the storm water basin (sheet 85) shows what the basin will look like. You can see from the basin detail that trees will not be replanted in the storm water basin.

We will be planting trees on the Parkerville right-of-way. They will be matching the trees along the driveway of the Burnett House. These trees aren’t shown on the plans.

Information circulated at the time of the Town Meeting vote certainly didn’t highlight that trees would be felled at Parkerville. But it did state that problematic drainage at Parkerville Road would be addressed by the project. Looking back, I confirmed that the relevant facts were publicly shared.

Presentations at Town Meeting and an advance public forum at the library both stated that water retention basins would be created along that strip of road.*

The 75% concept plans that were made public for interested residents in advance of the Town Meeting indicated that section of land on the northwest side of Parkerville Road would be used as a “stormwater treatment area”. (You can view the Parkerville Rd area pdf here. Or, for just the relevant section, I cobbled together a cropped image with inserted legend right.)

The gray text is illegible in that color version, but the black and white “75% submittal plans” clearly showed that trees were in the section identified to become the treatment basin. (You can see the pdf here or the cropped section right.)

While the Town has a fairly easy to find Main Street updates page, you might find it harder to locate the old page with past Main Street documents and presentations. But is still there. If you want to check on any other project details – you can find those here.

This isn’t the first time in recent years trees were cleared from the preservation-restricted historic 84 Main St property. Back in September 2016, the Historical Commission warned that part of the landscaping plan included removing trees and planting “century trees”. You can read about that here. And you can see pictures with newer plantings since on the Friends of Burnett-Garfield House Facebook page.

*If you’d like to see those sections of the presentations, you click on links to those moments in SAM’s videos of the 2016 Special Town Meeting and October 2016 forum.

Thank you for clearing this up. I too am not an engineer so many of the drawings and plans were not easy to comprehend. Even so, it is a disappointment to see those trees come down. I certainly can understand the ones along Main Street have to come down to allow the street expansion. Thanks again, Beth.

I was chagrined to see the “R” marked on the side of the Main St. trees, but I was relieved to see an elevation plan that included replanting of those trees, although apparently a different species.

What? The trees that were cleared were not town owned trees?

Was taxpayer monies used to clear trees not owned by the Town? This was not disclosed or explained at any time to taxpayers at Town Meeting. The taxpayers certainly would not favor spending their taxpayer dollars to take down the trees of a private developer.

The developer is building a luxury B&B. He claims to be worth over $100 million dollars and received $1 million dollars of taxpayer funds already. This is before the citizens were aware he was claiming what he is worth in a subsequent response to the Fayville RFP, which the town is selling to the same developer for virtually nothing on a one bid response. Who are the Town officials responsible for this?

Now the Town is clearing out brush and trees at the Town’s expense? Is that right? Are the taxpayers paying for the planting of new trees on this property? And to “match” what is on the property? Who and how did this plan come to pass, to “match” the developer’s trees and plant them at the taxpayers expense?

And “the trees are not shown in the plan.” What?

Taxpayer dollars should not be funding these costs. Who are the Town officials responsible for this? Say what?