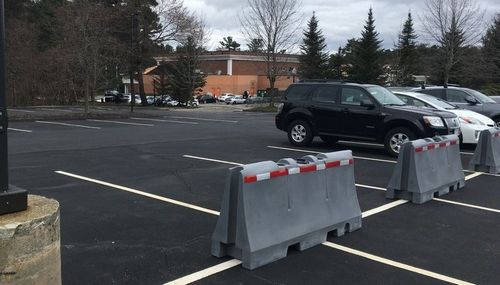 Above: Planning Board members purport that barriers that were placed to prevent parking lot crossings didn’t do their job this spring. According to last night’s update, barriers will be moved to block the driveway – if they haven’t already been. (photo by Beth Melo)

The disallowed vehicle crossing from The Crossings Plaza to the abutting office building parking lot should be temporarily barricaded this week.

The news came in an update by the Town Planner at last night’s Planning Board meeting. That’s 6 months after the Town began looking into the driveway that was suddenly installed without approvals.

The news was welcome for Planning members upset that a compromise plan using jersey barriers – which they hadn’t approved – hadn’t been delivering as promised. Members drove through gaps between some of the barriers.

A neighbor also commented that even some drivers that parked behind the barriers weren’t complying with the compromise’s intent. She observed people walking over to to the office building. Presumably, some 144 Turnpike Road tenants were parking on the 154 Turnpike side of barriers so that they could access Breakneck Hill Road at the end of the day.

Yet, since developer William Depietri has been working with the Town, he hasn’t been fined for violating the site plan or for the continued access between barriers. Depietri and his assistant recently sat down with Planner Karina Quinn. They told her to expect an application to modify the site plans for 144 & 154 Turnpike Road next week for a hearing to open in June.

Yesterday morning, the Town responded to my recent public records request. Based on that and my observations, here is the communication timeline around the issue:

Failure to comply with an agreed upon endorsed remediation with the Building Commissioner and Planning Board, and others if required within (30) seven business days may result in fines or possible court action.

the board would like the property either brought back to the approved site plans in the past or revise those approvals at the next meeting. . .

She offers to extend the deadline 30 days. Depeitri immediately responds that he will “go with the revised approvals” but isn’t sure he can get it done in 30 days. She returns that there’s no problem on the 30 days, she’ll just use it as a reminder to check on the status. She informs Quinn of the status.

*I formally requested written communications from between the Town Planner (Karina Quinn), Building Commissioner (Laurie Livoli)  and the developer (William Depietri) since the start of the year. You can read the compiled packet here.

I’m all for reasonableness and discretion in application of the law. When I left my car on the street during winter, I got a warning, not a ticket. Then I complied with the rules.

It’s really galling that certain people defend their violations and don’t get fined for six months. You and I couldn’t get away with that.