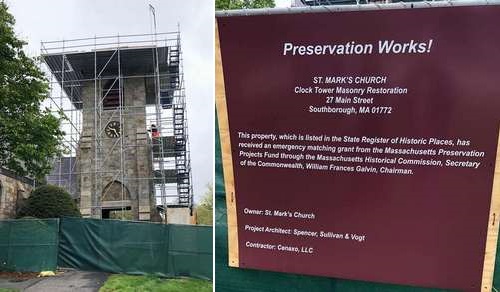 Above: It sounds like work to restore a historic bell tower will take a lot more funds than are in the episcopal church’s coffers. (images from Facebook)

A year ago, I shared that St. Mark’s Church was holding a rummage sale to raise funds for refurbishing its historic tower. Yesterday, I observed scaffolding that indicated work had started. A Wicked Local story educates that while the tower is being “shore up”, the restoration work will take a lot more funds than could be drummed up through a yard sale.

It looks like they’re hoping to get some of that through a Community Preservation Act Article. They’ll be applying in the fall in hopes of going before Town Meeting voters next March. Though, it sounds like they aren’t putting all of their eggs in that one basket.

The article also mentions Southborough philanthropists that made building the church and the tower possible. Th names below should be familiar to some of you: Joseph Burnett (of the Burnett house, Deerfoot Farm, etc.) and Charles F. Choate (who also established a fund to benefit youth recreation in Southborough more than 100 years ago).

For almost 125 years, the stone bell tower of St. Mark’s Episcopal Church has been a Main Street landmark.

The church wants to keep it that way.

While there is no immediate safety risk, the church started shoring up the tower, which was added to the building 35 years after the church was built in the early 1860s.

“It’s a beacon for the community,” said Peter Poulin, senior warden at the church.

Scaffolding for the first phase went up just before Easter last month after the church received an emergency matching grant from the Massachusetts Preservation Projects Fund through the Massachusetts Historical Commission.

Church officials hope to raise $600,000 through a capital project campaign and other grants to complete the work. The first phase includes work around the copper roof and one of the four main supports called a buttress.

During routine maintenance, a mason discovered the tower needed work. An architecture firm, Spencer, Sullivan & Vogt, determined that work to fix cracks and exterior stones pulling away from the structure needs to be done within three to five years.

“The situation isn’t that we are fearful that a stone is going to fall off or the tower is going to fall down, but if we don’t do anything about it in the next few years to come stones could start to come down,” Poulin said. . .

The tower, donated by Charles F. Choate, holds the church’s bells and clocks on the exterior. . .

The church was founded in the mid-1800s by Joseph Burnett