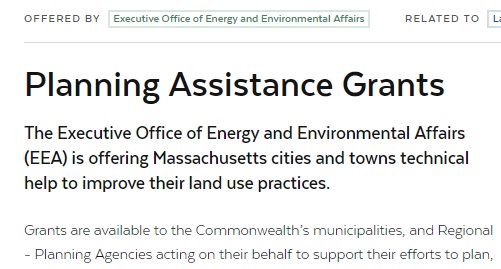 Above: The EDC hopes that a state grant will support efforts to revamp zoning for the Downtown Business Village. (image cropped from EEA website)

The Board of Selectmen and Economic Development Committee have scheduled a joint meeting for this Thursday night, May 23rd. The topic is EDC’s Downtown Initiative.

The talk will follow up on a discussion at the May 7th BOS meeting. On that night, selectmen approved EDC’s pursuit of a state grant to help their efforts.

The EDC initiative focuses on revitalizing the the Downtown Business Village. Two of the biggest obstacles they have identified is the area’s limited septic capacity and zoning.

At the meeting two weeks ago, Selectmen Dan Kolenda spoke to fellow board members about supporting EDC’s efforts. He offered to be a liaison on working with the group on updating zoning bylaws. The discussion took place one week before the Town election to elect two new selectmen. BOS Chair Lisa Braccio suggested that the EDC return this week to talk to the reorganized board.

EDC Chair Julie Connelly agreed. But first, she still wanted to give them a quick update. She explained that the Mass Executive Office of Environmental Affairs offers a a Planning Assistance Grant for municipalities. The deadline to apply is May 24th. According to Connelly, 100% of last year’s 31 applicants received grants – ranging from around $5K to $150K. Ashland was awarded over $27K just to rezone their downtown.

The EDC Chair said that volunteers didn’t have the bandwidth to take on the application. The committee planned to have former member and former interim EDC Coordinator Claire Reynolds take on the task. She’ll work at her contract rate and agreed to keep it under $2K. The EDC approved the measure since the money is in the budget (due to a past staffing gap) and they expect a big return on the investment.

It wasn’t clear that a vote of approval from selectmen was required, but one was unanimously given.

I was curious about the EEA grant. I wondered, given the agency’s name, and the downtown conservation issues impacting septic/sewage restrictions, if there was overlap on that front. It’s possible that EDC will manage to find one, but it’s not an apparent focus of the grant.

These Planning Assistance Grants are part of an effort to encourage municipalities to implement land use regulations that are consistent with the Baker-Polito Administration’s land conservation and development objectives including reduction of land, energy, and natural resource consumption, provision of sufficient and diverse housing, and mitigation of/preparation for climate change. Funds help communities retain appropriate technical expertise and undertake the public process associated with creating plans and adopting land use regulations.

Priorities for Program spending include:

Connelly told selectmen that including sustainability, housing, and green space in zoning would also help make their application stronger. That jives with the other 2 grant priorities:

Green space would also fit in with the vision EDC has promoted of a revitilized downtown based on residents’ survey responses.

Along with businesses (like coffee shops and restaurants), Connelly told selectmen that beautification, green space, and parks were among things residents wanted. (You can see some of the related responses by clicking on image right.) Connelly said it was in keeping with downtown’s “bucolic feel”.

Instead of the EDC joining tonight’s BOS meeting, selectmen will be joining an EDC meeting scheduled for this Thursday at 6:00 pm in the Hearing Room. The first item on its agenda is the update for the BOS. (The joint meeting with the EDC is the only planned item on the BOS agenda.)