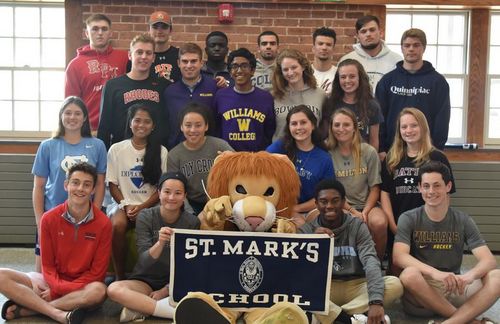 Above: Next year, 23 members of the St. Mark’s Class of 2019 will participate in college and university athletic programs. Four of them are Southborough residents (photo from school website)

St. Mark’s School shared news about four of its seniors – sorry, make that “VI Form students” – that are also Southborough residents. The student athletes signed on to play their sports next year.

Since the news is from the school, I think its safe to assume that none of them “photoshopped” their way in. In fact, a little digging turned up some impressive past highlights for the students:

Grant Gattuso will run for cross country for Williams College

A Captain on the Boys Varsity Cross Country team, he consistently led the team in meets and finished 3rd place in the Independent School League Championships and 12th place at the Division One New England Championships.

Zoe Maddox will play soccer for College of the Holy Cross

As goaltender, she helped get her team to the NEPSAC quarter final round last fall. She was one of the players recognized by the Independent School League.

In his last year of Little League play, he was part of the Southborough team that earned the State Title in 2017.

She helped get her team to the NEPSAC quarter final round last fall. She was one of the players recognized by the Independent School League