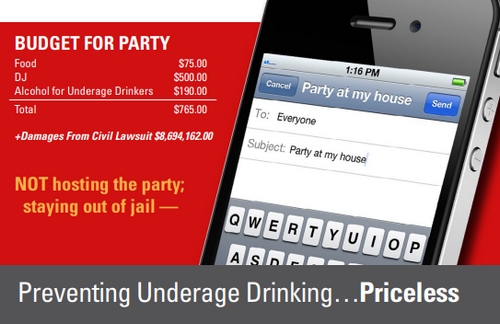 Southborough Police released news of an underage drinking incident that happened this week.

The press release shares that a Southborough parent will be brought up on charges under the state’s “Social Host Law”.

It’s a law that the SPD clearly wants the public to be aware of. The state holds adults liable for furnishing alcohol. And furnishing doesn’t need to mean purchasing it our handing it out. It also covers simply allowing minors to access alcohol in your home (even if you aren’t home).

The release includes a reference for the community to check an SPD Facebook post for details on the law. But, the screenshot graphics are a bit tough to read – so I’d recommend instead checking out the same flyer on this site. (It’s posted by the Substance Abuse Prevention Collaborative which also has an FAQ here.)*

If you’re concerned about the topic, you may also want to revisit the SPD’s policy on responses to underage drinking incidents. It has been moved to their new website since the last time I posted a link. You can find that here.

On, 5/23/19, at 0123 hours, Southborough Officers were dispatched to [a Southborough home] for a medical involving intoxication along with Southborough Fire. Upon entering the residence, signs of alcohol use were clearly evident. One subject was transported to Marlborough Hospital for evaluation. Officers observed further evidence of alcohol use in the backyard, and kitchen of the home.

The parent in charge of the house, [Southborough resident] (age 51), will be summonsed into Westborough District Court at a later date on a charge of Furnishing Alcohol to Person Under 21, 138/34. An estimate of approximately ten underage individuals in the home prior to arrival was given to the responding Officers for an “end of the school year party.” Five underage individuals from Southborough and Northborough were released to parents or a guardian. School officials were notified of the incident.

Anyone looking for more information on the Social Host Law can look at the SPD Facebook Post from April 28, 2019.

*There is also a more recently published version of the Social Host Law flyer. Unfortunately, the state designed it for printing and folding, so some sections are upside down on the screen. I flipped those two sections below. You can read the rest of the flyer here.

**By blog policy, identification of the accused was stripped out.