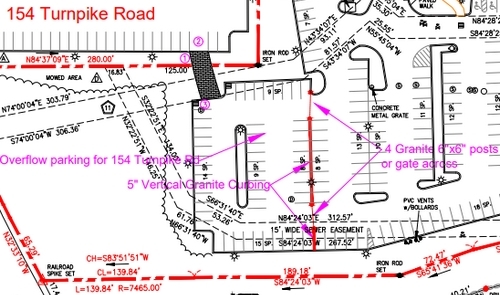 Above: Proposed modified plans seek to use a portion of 144 Turnpike Road office park parking lot as overflow parking for the abutting retail plaza, The Crossings. (image cropped from plans)

On Monday, the Planning Board will discuss proposed modifications to the Site Plans for 144 and 154 Turnpike Roads. Unlike previous discussions, this one is an official public hearing. And the developer has submitted an application for requested changes.

The request by Capital Group Properties seeks to allow the driveway that was installed without permission between the abutting properties. The last time developer Bill Depietri was in front of the board, he defended it as allowing tenants of the 144 Turnpike office building better access for their commute.

That was in opposition to conditions of approval for the original site plan. The Planning Board had sided with abutters who argued that allowing office building tenants to commute via Breakneck Hill Road would be dangerous.

This time, Capital Group will ask to allow The Crossings at 154 Turnpike access to a section of the 144 Turnpike property as an overflow parking area.

Modified plans present two options. Both include allowing the driveway to remain for access between properties. The first shows the use of Jersey barriers to cordon off a section of the lot. The moveable barriers would give the owner flexibility for deciding how much overflow parking was needed.

When jersey barriers were used as an interim measure earlier this spring, residents complained that they didn’t work. Barriers were moved allowing cars to pass freely between.

A second option would hopefully eliminate that issue. The alternative proposal is the installation of a permanant barrier using granite curbs and metal posts connected by chains.

The need for overflow parking was raised at the January meeting. Resident John Butler told the board that prior to the installed driveway, he witnessed cars parked on Breakneck Hill Road during dinner hours. But he also noted that the original plans called for the retail plaza to use its underground parking area for employees. According to Butler that wasn’t being done. Some residents have argued that the plaza should be using that parking area, not expanding next door.

In April, when barriers were used to define overflow parking, one abutter told the board that she witnessed drivers parking there, then walking to the office building. The implication was that 144 tenants were using the area in order to have access to Breakneck Hill Road for the evening commute.

Currently there is no driveway access between the properties. Earlier this month, Planning confirmed that the developer complied with directions from the Building Commissioner. Planning had instructed that they couldn’t approve an alternate interim measure that didn’t go through the public hearing process.

The hearings will open at 8:00 and 8:05 pm on Monday night, June 3rd, in the Town House Hearing Room. You can view the related documents here.