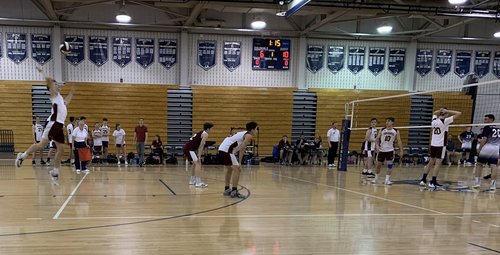 Above: Boys Volleyball played its first, and last, round in sectional tournaments. (image cropped from tweet by @ARHSAthletics)

Last week closed out the regular spring season for most Algonquin varsity sports. Softball ended on a high with a win over Notre Dame. But it wasn’t enough to propel the team into post-season tournaments.

Baseball also had a great end-of the season game, with a 2-0 win over Hudson. The difference is, that team is one of the many qualified for the tourneys. The Boys are still waiting to learn their berth in the playoffs.

Rugby seeding is also to be announced this week. (At this point it’s not clear to me whether the Boys and/or Girls believe they made the cut.)

Tennis and Lacrosse teams have all learned that they earned BYEs on their first rounds for sectionals. Now they’re waiting to find out who they’ll face in the Quarter Finals. Top-seed Boys and Girls Tennis are scheduled to play on Wednesday, June 5th at 3:00 pm. Dates are still TBD for top-seed Boys Lacrosse and 3rd seed Girls.

Boys Volleyball took a hard fall from its sectional. The 4th seed team lost 3-0 to 13th seed Lincoln-Sudbury in the Central Division I first round.

Meanwhile other teams are deep into their post-seasons.

Outdoor Track competed at All States over the weekend. The boys earned 12th place and the following members qualified to head to the New England Championships this Saturday:

The Girls team ranked 59th. None of their members qualified to automatically compete this weekend. Four did earn spots on the alternate list, so they might get a chance:

The Westborough/Algonquin co-op Girls Golf Team teed off at the State Championship this morning. The players are: Haley Lee-Burke, Chay Maloney, Liza Armstrong, Elise Arvanigian, Kim Huang, and Grace Tang. (Note: When the Telegram covered the Girls sectional win last week, there was nary a mention of any players coming from Algonquin. But I have been able to determine that at least one of them is.)

Look for another post-season update from me later this week.

Updated (6/3/19 5:18 pm): Initially, I didn’t have the golf results yet and had pointed readers to check out the live tweets from sportswriter Brendan Connelly.