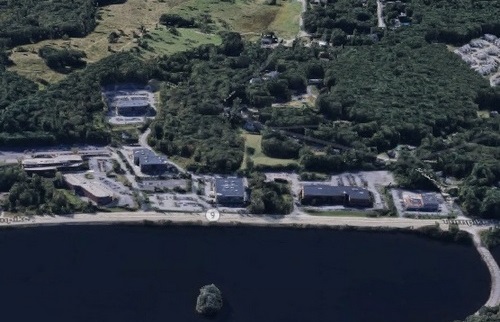 Above: Plans for parking at two pairs of buildings on this section of Route 9 were discussed at last night’s Planning Board meeting. (image cropped from Google Maps)

Hearings were held last night for proposed plans to handle parking at two pairs of nearby buildings on Turnpike Road. One property owner is making a second attempt at increasing parking to attract tenants to his office buildings. Another owner made, then withdrew, an application to use one property’s lot as a connected overflow parking area for his abutting property.

Here are recaps from the Planning Board hearings.

Permitting Manager Daniel Ruiz represented Capital Group Properties at the public hearing. The company sought a modified site plan that would allow keeping a driveway connection that was previously installed.

Ruiz told Planning that the connection was needed for overflow parking from the retail Plaza, the Crossings, at 154 Turnpike. He claimed that restaurant tenants complained about insufficient parking that led to losing customers.

Ruiz denied the connection was for convenience of office tenants at 144 Turnpike Road. Last night, he claimed that after the driveway was installed, a memo was sent to tenants that they were not to use it as a cut through. That elicited laughter from attending abutters who had complained about the additional commuting traffic the connection had caused.

Ruiz’s claim contradicted Capital Group’s President William Depietri’s defense to the the board in January. At that time he justified that he made the connection for that very purpose. The parking issue for restaurants was raised by a resident later that evening.

Several nearby residents claimed that the parking issues that John Butler had informed the board about in January were an anomaly. They live right there and never see a full lot or any parking on Breakneck Hill. And they pointed to the applicant’s documents as clearly showing that the number of spaces in each lot exceed the number of required spaces.

Ruiz also claimed that employees at the plaza were using the parking garage under the building. Abutters claimed that they always see the lot closed, not used. Ruiz was unable to answer how many cars park in the garage on a daily basis.

Residents and some board members expressed skepticism over plans to separate the parking lot areas with jersey barriers or chains. Some worried about it not being permanent enough given the owner’s track record – installing a driveway without permission. Others worried about the ease with which a 144 tenant could park on the wrong side of the barrier then cross the divider to work.

Commenters also pointed out that a sign at 154 Road could easily point drivers to use the 144 lot for overflow parking.

If the hearing was continued, the applicant would have been asked to submit more proof of the parking problems and address issues with the driveway’s sight-lines. He would probably also have been asked to propose a more permanent/solid barricade. And member Meme Lutrell raised concerns that the change would put the 144 Turnpike Road site out of compliance by lowering the number of spaces below the requirements.

In the end, Ruiz took a break to discuss how to proceed with Depietri. When he returned, he informed the board that the application would be withdrawn and the site returned to compliance. That included removing the driveway and relandscaping the area. He confirmed that would take place within a month.

Earlier that night, representatives for offices just down the road proposed a different plan for their parking issues. It followed a previous attempt they withdrew last fall.

In October, owners of 118-120 Turnpike Road sought to expand 175 back into the portion of their property on the Residential A zone. They ran into a roadblock when Town Counsel informed that the accessory parking only allows an up to 30 feet intrusion in the zone. The applicant is now seeking permission to build a 4-level parking deck.

The owners are looking to attract tenants to the office buildings at 118-120. Steven Cox explained that parking is a major issue for potential tenants. The garage would add about 375 spaces to the existing parking.

Calling himself a “tree hugger”, Cox said that they left as much green space as possible on the hill behind. They also plan to improve the plaza area between the two existing buildings, with walkways, a fire pit, seating, etc. They will eventually improve the walking path to the abutting conservation land trail. Plus, they are looking at donating land behind the garage as open space – perhaps to the Town as an add on to Breakneck Hill Conservation Land.

The Stewardship Committee’s Freddie Gillespie thanked them for the revised plans, which gave them everything they asked for. She said the original plan would have put a lit parking lot right next to a walking trail in the Town forest.

There some back and forth with the board with questions about the lighting situation in the garage. There will be some internal lighting for security, but owners don’t plan to make it well lit.

The application is also in the midst of Conservation Commission hearings. The Planning hearings were continued to July 8th at 7:20 pm. You can find material related to last night’s hearing here.