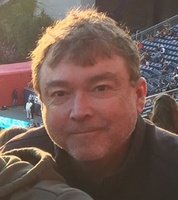 Paul J. Weber, 58, of Southborough, passed away suddenly when stricken ill at his home on Saturday, June 1, 2019.

He was the beloved husband of Catherine M. (Kundrath) Weber for the past 31 years. Born in Brooklyn, NY, he was the son of Florence (Neesham) Weber of Clinton, CT and the late Francis Paul Weber. Paul was a 1978 graduate of The Morgan School in Clinton, CT and earned a bachelor’s degree from Boston College in 1982. He was a software developer for Harvard Bioscience of Holliston.

Paul was a great friend to many and surrounded himself with good friends, music and food. He was an amazing musician, and was asked to bring his guitar where ever he visited. Paul loved the outdoors, especially kayaking and hiking in National Parks throughout the United States. One of the highlights of his life was hiking in Alaska with his son Benjamin. He will be sorely missed.

In addition to his wife and mother, he is survived by his son, Benjamin Weber of Southborough and his sister, Nancy Guindon of Clinton, CT. He leave his nephews and nieces Garrett, Douglas, Ian, Jessica, Grady, Sands, Brianna, and Nathan as well his brother-in-laws Mike, Joe, Bob, and Bill, and sister-in-laws Therese, Mary, Maureen, Patti and Ericka.

Along with his dad, Paul was also predeceased by his sister, Susan Weber.

Visiting hours will be held on Thursday, June 6, from 4 to 7 pm at the Morris Funeral Home, 40 Main Street, Southborough.

A funeral service will be held on Friday, at 11 am at the Pilgrim Church, 17 Common Street, Southborough. He will also have a Mass of Christian burial on Saturday, June 15, at 12 noon, at St. Mary’s Church of the Visitation in Clinton CT. A burial will follow in the St. Mary’s Cemetery..

In lieu of flowers, memorial contributions may be made to the Ben Weber Scholarship and Family Fund on GoFundMe.

To leave words of condolence to the family, please visit www.morrisSouthboroughfuneral.com