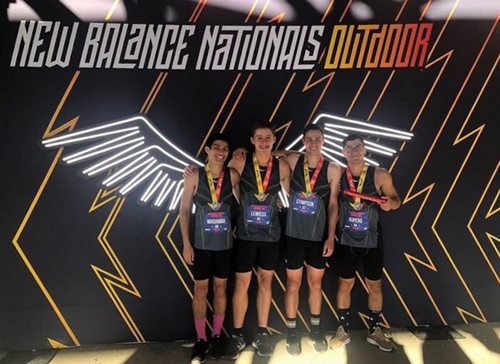 Four Algonquin athletes competed at a national tournament last week and walked away with medals. (Although, technically they are alumni, since all of them graduated earlier this month.)

it was a great finish to their HS careers. Alex and Matt have qualified twice for Nationals, and for Thomas and Luke this was their first time. They have run numerous relays together throughout HS but this was their crowning achievement for sure.

Over the weekend, three players from Algonquin’s Girls Tennis team competed in the state tournament. None snagged the title. Elaine Cho and Yasmin Lee won their Doubles Semi-Finals against girls from Winchester. But in the Finals match against Wellesley girls, they lost the last two games (6-4, 4-6, 6-0). (For the dramatic details, check out the Telegram’s coverage here.)

Freshman Olivia Almy lost her singles semi-finals to an Acton-Boxborough player. She won the first game 7-6, then lost the next two 7-3 and 6-1. It looks like she may get a rematch this week via the teams’ championship bids.

Yesterday, the Girls team earned a shot at becoming state champs. The team beat Longmeadow at the state semi-finals on Monday (5-0). Thanks to a sports journalist’s tweet, you can watch Almy triumph and secure the team’s win:

The undefeated Gonk Girls Team will head to the State Finals at St. John’s tomorrow, Wednesday, June 19th, at 4:00 pm. They’ll face Southern division’s Acton-Boxborough for the first time as a team this year.

The Gonk Boys also beat Longmeadow in state Semi-Finals (3-2). They’ll head to their finals at St. John’s the next day. Their competition at Thursday’s Finals may be a bit intimidating. They’ll be facing the undefeated Northern division champs for the second time this season. A few weeks back, Brookline bested them 5-0. The match is schedule for 4:00 pm on June 20th.

Here are the tweeted final moments from the Boys’ Semi-Finals: