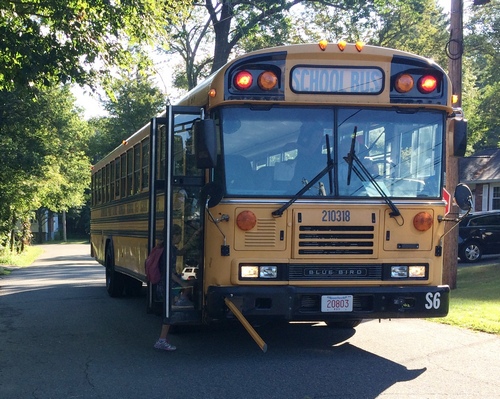 Above: The district is hoping kids can hop on the bus the first day of school without any problems. To that end, they have taken back the reigns on designing routes, but will also engage drivers in the process. (photo by Beth Melo)

This week, the Northborough-Southborough School District issued another Transportation Update. It reiterates their improved process for determining bus routes for this fall.

This summer, the district has taken back control of programming the routes. The administration hopes to for a smooth start to the school year. To help with that, they plan to post the new routes by Monday, August 19th – nine days before the start of school.

The administration doesn’t assume the routes posted on the 19th will be final. Parents are encouraged to look out for that information. Expect an email announcement to include details on:

Last summer, the district sought to use the expertise of its bus company (NRT) to help redesign bus routes. The intent was to improve efficiency of routes and shorten bus route times. There was hope that time could be shaved off of bus routes. That could have assisted in shifting the high school start time a little later without major disruptions to the lower schools.

Unfortunately, the result was far from that.

Initially posted bus routes were a complicated mess leading to a deluge of complaints and questions. Revised, reposted routes were riddled with more problems. (Some showed buses backtracking to pick up students the buses already passed. Some route times were excessive. Others showed logistically impossible short times, causing some drivers to start their routes well before the posted times, causing kids to miss the bus.) There were also communications issues, as last minute changes were sometimes missed by parents.

The school and bus company scrambled to rework the routes. But it took more than two weeks and several failed iterations. The final routes were posted on the 8th day of school. It was a tense time with parents upset and the district and bus company pointing fingers at each other over who was at fault.

This summer, the adminstration clearly hopes to avoid repeating any part of that fiasco. District staff are determining the routes, as they had in previous years. There will be a step that includes getting feedback from NRT. Most importantly, it will engage the drivers for their input.

The announcement also included a link to the school’s transportation policy, which linked to its guidelines. Those included:

Route Design: Each year, the transportation contractor in partnership with the districts, develops routes based on the location of the residencies, historical ridership numbers and will be determined on the basis of safety before convenience.

In addition, the following will be considered when creating the routes:

Bus stops will be established by the school district at locations, which will be determined on the basis of safety before convenience. Bus stops will be consolidated when feasible and safe.

I know that several, if not many, people have been lobbying the school district administration to roll out a ‘where’s My School Bus’ phone application for a FEW YEARS.

Several neighboring school systems use this system as well as Boston.

The source code for the application is publicly available (shareware). Why our school district refuses to bring this convenience to Southborough and Northborough families borders on criminal.

Apparently the schools prefer to (waste time to) field calls and make bus company referrals, rather than allow parents and children to see, in real time, where their bus is, when it’s running late – for whatever reason(s).

Too bad another year will slip by without this application being made available. To think we lavish ~70% of our property tax dollars on the school system…

They are piloting this app on a few routes. This was included in a recent email.

The District will be piloting the “Here Comes The Bus” application on a small scale as a proof of concept. Three routes will be selected, one from each district to set up the app. From this small-scale pilot, the District will determine if it’s feasible to move forward on a larger scale. More information will be shared about this pilot shortly.

This kind of tactics at the school level will continue until we the taxpayers say enough. Clearly they forget who pays their salaries. They do what they want, they buy what they want (with our $) and nobody holds them accountable. We need to stand strong with school committee and hold them to do the right thing. I heard they reorganized and let some people go while purchasing an office full of new furniture for the new superintendent and others. Nobody stops to think what that takes from our children. Let’s hope that we don’t end up with a lawsuit from letting people go. That would be detrimental to all our kids. They will never getvteacking software because they prefer you don’t know what is going on. Think of the waste in staffing $$ to field all the phone calls and deal with the issues. Remember last year Greg Martineau was tge problem piintvperson but wouldn’t take any xalls on tge issues, it won’t change. Waste!
School committee, where are you guys with all the spending and other stuff going on? DO YOUR JOB.

Resident – the only way this is ever going to change is to vote down the entire town budget during TM with guidance to cut the school budget by 5-7%. New school committee members will not matter. How many have promised change over the last ten years? They get cozy with the superintendent and the teacher’s union. Get caught up in “this can’t be cut” or “you can’t compare us to the surrounding communities” or “the education standards can’t be met with a reduced budget” – blah, blah, blah. They need to be forced into making the tough decisions. No challenge from the taxpayers means more of the same.