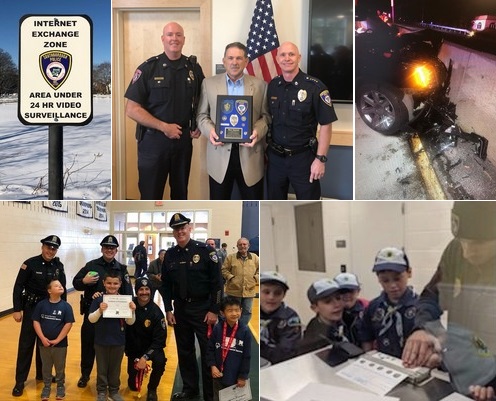 I know that it looks like winter outside. But technically it’s still fall. The last time that I posted Southborough Police Dept logs was late September. I have shared some of the SPD’s news since then, but there’s a lot that I didn’t. So, it’s past time for a big roundup of SPD news from Fall 2019.

The police logs list two houses burgled and one attempted break-in in November. Since I shared news of break-ins on the blog, the SPD was happy to report that one of the cases is believed to be solved, with charges being pressed:

CASE SOLVED: Charges have been filed against [a Milford man] for the B&E of a Woodbury Road residence in Southborough last month. Det. Keith Nichols was able to work with Hopkinton Police Detectives, after HPD had placed [the suspect] under arrest for a similar crime in their town. Southborough Police have charged [the suspect] with B&E Building Daytime for Felony; Larceny Over $1200; and Malicious Destruction of Property Over $1200. [The suspect] is currently incarcerated and awaiting trial. Excellent work by Det. Nichols and the HPD Detective Division!

The many hours of monitoring traffic safety during that time led to a number of criminal charges. Of the 14 arrests listed, 11 involved alleged drunk driving. Those don’t include two more OUI arrests that weren’t in the logs but were described by SPD in Facebook posts:*

On Friday October 25th, 2019, at approximately 0115 hrs, a Southborough Officer on patrol attempted to stop [a Westborough man], as he was operating on Southville Road at a high rate of speed. The officer activated his lights and attempted to stop [the driver], but [the driver] fled from the area. A short time later, the officer came upon [the driver] at the intersection of Parkerville Road and Turnpike Road, where he had crashed his 2020 Cadillac Escalade into the median barrier on Turnpike Road (Route 9 Eastbound). [The driver] was placed under arrest and charged with OUI Liquor; Negligent Operation of a Motor Vehicle; Failure to Stop For Police; and Speeding. . .

On 11/27/19 at approx. 0057 hrs, while conducting a radar post on Turnpike Road, Officer Stephen Neivert pulled over a motor vehicle for traveling at approx. 83mph in a 50mph zone. The operator, later identified as [a Sterling man]., showed signs of alcohol impairment, and subsequently failed officer-requested field sobriety tests. [The driver] was placed under arrest and charged with OUI Alcohol (5th Offense); Negligent Operation of a Motor Vehicle; and Speeding. [The driver] was released after paying a $1040 bail fee.

Another 14 “Criminal Applications” were listed as pressed against drivers stopped by the SPD, at least one involving an “Erratic Operator”. The logs also list 14 reports of larceny, forgery, or fraud.

Since the over 1,500 entries is too long to include on the blog, I saved them to a pdf file you can open here.*

Not all traffic detail this fall was about looking for criminals. SPD officers also escorted someone passing through on a special mission in November:

On a somber note, the SPD and SFD showed their presence on 495 as a show of respect for fallen Worcester firefighter Lt. Jason Menard during his funeral procession.

In a happier show of respect, in October, the force celebrated the retirement of a longtime department member – Police Business Administrator Rick Mattioli:

Congratulations to one of our own- Richard “Rick” Mattioli, on his retirement after 42 years with the Southborough Police Department! That’s right…you heard us correctly….42 years! Earlier today, his friends, family, and co-workers got together to celebrate his retirement with a ceremony at the Southborough Police Department. A great time was had by all.

Rick was responsible for our Southborough Police Department Mission Statement. He was also responsible for obtaining more than $2 million in grants; starting our community policing program; assisting with firearms licensing; and above all, being a friend and mentor to everybody and anybody who had the pleasure of knowing him or working with him. He would always take the time to make new employees feel welcomed, and would always make time for anyone to sit and talk with him in his office. It would truly be impossible to list all of Rick’s contributions to the Southborough Police Department over the years.

We wish you many years of Happy Retirement, Rick! Please take a moment to drop him a quick ‘Congratulations’ in the “Comments” section of this post. We would really like to show him how many people will miss him being at the Southborough Police Department!

In other sunny posts, the SPD has been happy to share images from helping at a Special Olympics event and working with Pack 1 Cub Scouts.

The Southborough Police Department would like to announce that the SPD Internet Transaction Safety Zone has been set up in the new Public Safety Building parking lot at 32 Cordaville Road in Southborough. Our goal is to reduce the chance of being the victim of a criminal act involving an internet sales transaction on popular sites such as Craigslist or Online Yard Sales. The police station is open 24 hours a day, every single day of the year. The lot is well-lit and monitored through video surveillance with a dedicated entrance/exit route. Officers will only intervene if the transaction becomes disorderly or becomes a criminal matter. The public can check in at the dispatch desk if needed, OR CONDUCT THEIR EXCHANGE IN THE LOBBY OF OUR NEW BUILDING. Parking can be accessed in any open marked space in the front parking lot. All citizens are encouraged to take advantage of the Internet Transaction Safety Zone. The exact address is 32 Cordaville Road in the Public Safety Complex. The establishment of the Internet Transaction Safety Zone is part of our ongoing commitment to Community Safety

*The police logs posted to Facebook were missing entries for the weekend following Thanksgiving – Friday, November 27 to Sunday, November 30. (I don’t know why the arrest on October 25th wasn’t in the logs since that date was posted.)