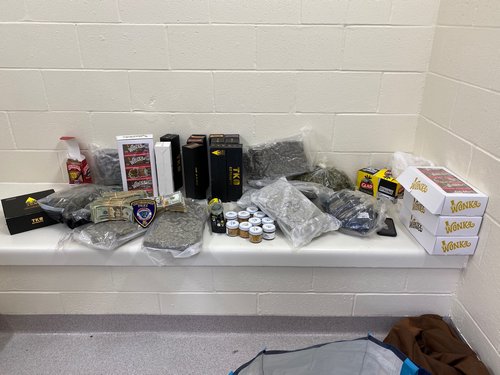 Above: After the SPD seized marijuana, edibles, and oils from his car over the weekend, a suspect failed to show at his Court hearing scheduled for yesterday. (photo contributed by SPD)

The Southborough Police Department has been busy. They just issued a press release on another recent arrest. This one ended with the arrested suspect appearing to have jumped bail.

The incident entailed a driver with an expired inspection sticker and suspended license. The SPD announced that what started as a traffic stop led to an arrest over the large amount of marijuana and related products found in the car. The suspect made bail but failed to appear for his Court date yesterday:

On 1/5/20, at 8:20 p.m., Officer John Vosikas was working a traffic enforcement shift when he conducted a traffic stop of a rented GMC Terrain operating on Boston Road with an expired inspection sticker. Further investigation showed the driver, [a Mattapan man]*, was operating with a suspended license. Sgt. Sean McCarthy and Officer James Gallagher arrived to assist.

[The driver] was placed under arrest. An inventory of the vehicle contents showed a large amount of cash and marijuana products. The GMC was towed back to the Southborough P.D. On 1/6/20, Detective Keith Nichols obtained a search warrant for the vehicle. He was assisted by Officer Thomas Rock, and MA State Police K9 Trooper Kyle Kilimonis. A large amount of assorted vacuum sealed bags containing marijuana along with a cache of various marijuana oils and edibles were seized. In addition, $21,865.00 in cash was also seized from inside the GMC.

[The accused] was charged with, DRUG, DISTRIBUTE CLASS D, SUSEQUENT OFFENSE, 94C/32C/B, along with the traffic offenses. He was released after a bail hearing at 11:34 p.m. Sunday night, when $5,040.00 cash was posted on his behalf. [The suspect] has two past guilty findings for Intent to Distribute Class D, as well as one open case for the same charge. He also has a lengthy criminal record of other charges. He failed to appear in Westborough District Court on Monday. A warrant has been issued for his arrest.

Anyone having further information should contact Lt. Ryan Newell or Detective Keith Nichols at (508) 485-2147.

Updated (1/8/19 1:00 pm): I removed a reference to the suspect’s last name that was accidentally still included.

The police have been very busy, Keep up the good work getting these bad guy off the streets

You’ve used the suspect’s name in your story – so much for the blog policy of omitting people’s names!

Thank you for bringing to my attention. The inclusion of the last name in one paragraph was an accidental oversight. I fixed it.

Why does MySouthborough have a policy of omitting the names of those charged with misdemeanor and felony offenses?

And why are weekly Southborough Police activity logs (charges, arrests, etc ) no longer listed In MySouthborough?

What is the reasoning for this?

1. Omitting names: The policy was started by Susan before me. After she explained it to me, I decided to continue it. Initially, she said that she didn’t mention it in the first story that came out, but did when there were subsequent stories. (Which is why that was how I initially handled it.) Later, I understood that she generally only used the names when the case was going to trial, and revised my actions accordingly.

I won’t try to recapture her rationale. The reason that I have decided to continue it is that an arrest doesn’t mean guilt. And when charges are subsequently dropped, it’s likely not to appear in my news feed. That means that on the blog, a suspect would accused but not cleared. Anyone who really wants to know the person’s name can easily find it through another source. I did make an exception last year when the SPD was searching for an allegedly armed and dangerous suspect. I felt that level of purported danger to the public meant that the public should be alerted and on the lookout.

2. Weekly logs. In years past, there was an interesting amount of detail in the blog. That’s now all stripped out and a whole lot of traffic duty is added in. (In fact, sometimes interesting items announced in press releases or shown in Facebook posts don’t even have a log entry.) In addition, I used to be provided the log and just have to do a quick format. It now takes me much more time to compile and format to make them easier to read.

I still cover it on occasion, rounding up what I missed in between. But this is the first indication I got that anyone was missing seeing them more frequently.