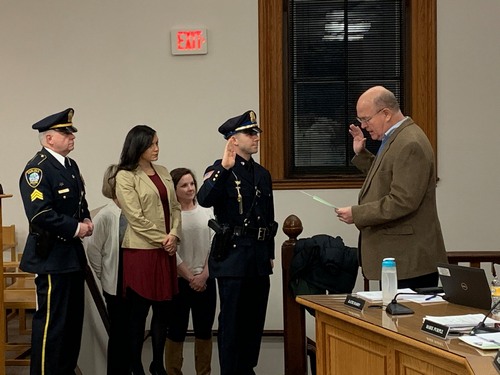 Above: After 8 years on Southborough’s Police force, Sgt Whelan was sworn into his higher office last night. (photo from Facebook)

Last night, the Board of Selectmen approved promoting Southborough Police Officer Michael Whelan to Sergeant. The SPD posted the good news with photos to Facebook:

The promotion was to fill a vacancy left by Sgt. Aaron Richardson’s resignation.

In July, selectmen approved Richardson’s promotion to Sergeant. It looks like it didn’t take long for the Mass State Police to scoop him up. The SPD posted pictures to Facebook of a farewell party, fittingly held at the Senior Center in December:

On a related note, Sgt Richardson successfully completed D.A.R.E. training in 2018. Having a 2nd instructor allowed the SPD to expand the 5th grade program to also be taught in 7th grade health. When I learned about Richardson’s departure, I wondered if it would have an impact on the curriculum.

Chief Kenneth Paulhus answered that School Resource Officer Kevin Landry will finish out Richardson’s classes for this year. Beyond that:

We will have to re-evaluate at the end of the year. The class and certification process are lengthy. Luckily, we have time to assess going forward.

Mike will do a great job for our town, we are so lucky to have him. Congratulations to Mike on his promotion. He has big shoes to fill with Aaron’s departure but he will do great!

The best of luck to Mike and Aaron going forward, both good men